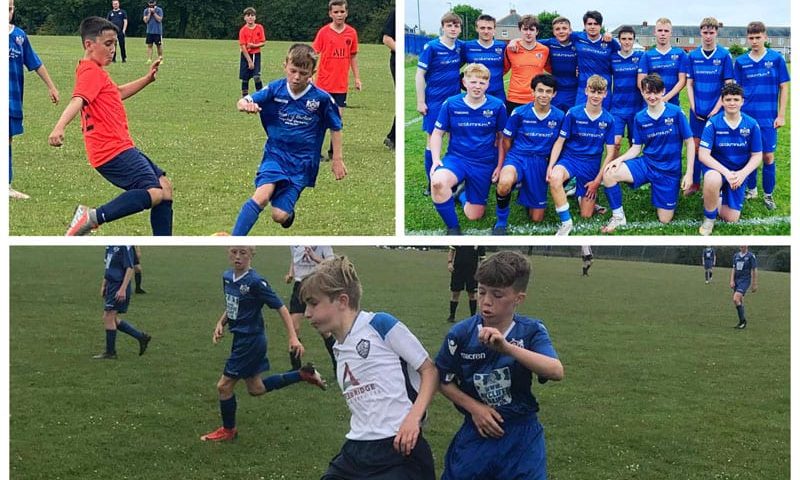 As the season comes to an end, on behalf of everyone at the club, we would like to thank all the players, coaches, parents, supporters, committee members and sponsors for the fantastic support we have received during this stop/start season, it’s very much appreciated, thank you!

The final weekend, and a reduced fixture list, with many teams having to cancel their games due to players isolating, however there were a few games that went ahead, see the full round up below.

U9 Juniors finished their season away to FC Hartlepool Athletic with a brilliant result. Aycliffe went ahead early on with a goal from Marley but Hartlepool came back with 2 of their own. Jack levelled just before half time. Second half Dom scored to put us back in front up & Hartlepool started to lose their composure & tempers but Aycliffe didn’t get dragged into it. The lads kept playing good football & a couple more goals from Jack & Jonah saw us take all 3 points. MOTM went to Dom.

U11s were at home today vs Stockton PSG. We started really well, James scored early on straight from a corner which took the PSG keeper by surprise. Alex then got on the scoresheet after some great build up play, PSG played some really good football and Logan pulled off some incredible saves but PSG got back into it by scoring 2 quick goals just before half time. The second half was just as exciting, PSG really put pressure on us and again Logan kept us in it. A formation change seen us take the lead, with Keaton out pacing the PSG defence to score past the out running keeper. PSG equalised late on. Great performances from Alex, Celina and Oscar today all made the MOTM a difficult choice but James fully deserved his award. Goals James x1, Alex x1 Keaton x1 MOTM – James

U12s Whites finished their season at home against Greatham. We conceded after just a few minutes but kept our heads up. Ethan equalised but we went in 1-3 down at half time. Ethan got his hat trick to bring us back level but Greatham pushed on to score twice more and then an unlucky own goal made the final score 3-6 to Greatham.

U13s whites beat Leven 6-1 this morning in our last game of the season. Tyler smith x3, Ollie, Niall and Tyler R. Great result and it means we can finish 4th if results go our way but means we will finish no lower than 5th. That’s a fantastic season for us in our first season back in division 1.

U16s played away at 3rd placed Thornaby Town Reds who sat 1 place behind us in 3rd. We came away 3-5 winners, playing some superb football….another quality result meaning 8 wins in last 9 games finishing 2nd , 5 points clear of 3rd and only 2 points off top….a great achievement and so proud of the lads, they really have been quality all season. Goals from Brennan x1, Jack x1, Callum x1 and George x2…Well done lads. Next season we are entering the U18s league which is sure to be challenging. If you know anyone interested in joining us, please call 07825845962 for more details.