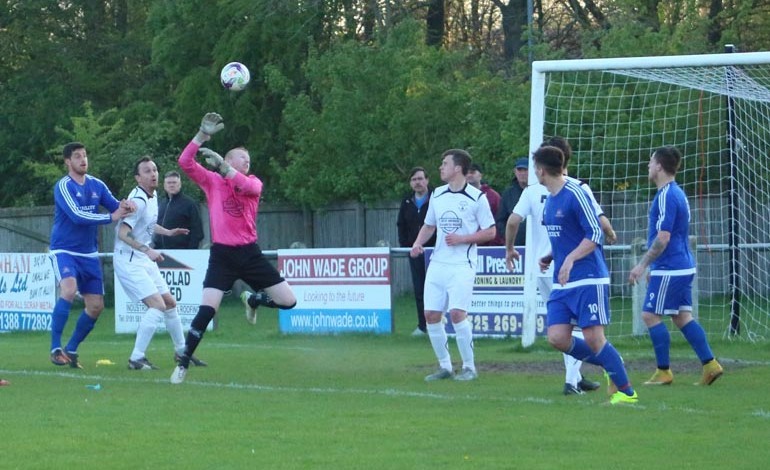 Newton Aycliffe FC played three games in the last week of the season to round off the best campaign in their history.

Bishop Auckland and West Auckland visited Moore Lane while the Newtonians completed their season last Wednesday night at Dunston. All three games ended in a draw.

Bishop came from two goals down to take a point in the last minute. There were no goals in the West game while leading scorer John Campbell came off the subs bench to earn Aycliffe a point at Dunston.

Aycliffe played a total of 59 games this season, including 17 cup matches. The wet winter weather and good cup runs contributed to a gruelling end of season fixture backlog but the team performed well to complete the season.

Now that the season has come to a close we can reflect that 2015-16 has undoubtedly been the most successful in the Club’s history.

A browse of the Football Club History Database illustrates just how far Peter Dixon has brought the team this year:

The players will be celebrating their success at the end of season presentations this Saturday (21st May) in the bar of Newton Aycliffe Sports Club. Supporters are welcome to join the players, management & committee on Saturday afternoon from 2pm to remember a marvellous season.

As the players begin their close season break, the club’s committee are already beginning preparations for the next campaign.

There is work to do on the ground and facilities on top of the “admin” work that goes into running a club in the FA’s National League System.

“We are always looking for volunteers who might want to contribute their time on match days or during the week,” said Secretary Steve Cunliffe. “Please contact the club via the website if you can help us.”

Season Tickets are already available for 2016-17, with the price remaining the same as last year. Adults £100, Concessions £60. The ticket allows for admission to all home league games and friendlies (but not Cup matches). Season Ticket holders are included in the supporters £20 monthly prize draw which runs between August & April. They are also entitled to a free hot drink at each home game from our “Bait Cabin”. Application forms can be downloaded from our website www.newtonaycliffefc.co.uk