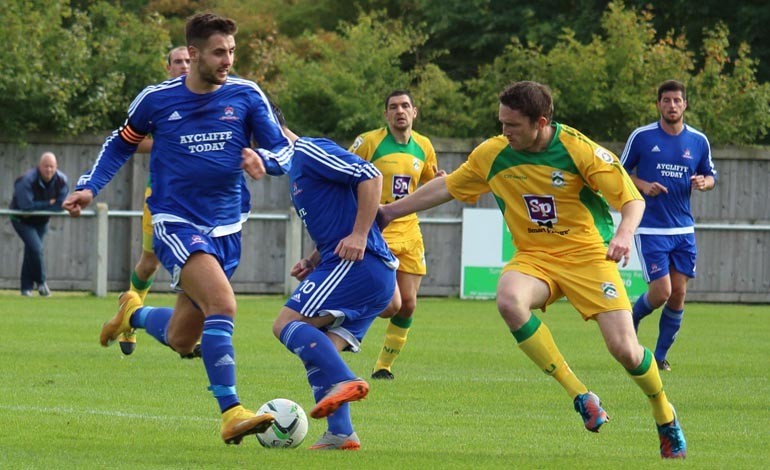 Newton Aycliffe pulled off one of the surprises of the FA Cup so far by holding a side 73 places above them to a draw at Moore Lane Park.

North Ferriby play in the National League North, formerly the Conference North, which is three divisions higher that than Aycliffe’s Northern League Division One.

The Hull side are the current holders of the FA Trophy having won the title at Wembley in March.

On Saturday, though, they came to Moore Lane and league status was soon forgotten as the two sides battled for a place in the draw for the next round.

Aycliffe’s defence were tested throughout by North Ferriby striker Tom Denton who at 6’7″ provided an easy target for his team-mates’ high balls into the box. Central defenders, Alex Kitchen and Grant Hickman, however, stood firm & were able to resist the aerial attack.

North Ferriby came close to scoring on a couple of occasions. Immediately after half-time a shot was well saved by Aycliffe keeper James Winter diving to his right. With ten minutes to go “The Villagers” saw a shot hit the woodwork.

The traffic was not all one way and Matty Moffat in particular gave the visiting defence trouble throughout the game but wasn’t able to add to the seven goals he’s collected so far this season. Brian Close in the Aycliffe midfield proved yet again what a great signing he has been for Peter Dixon with another outstanding performance.

The draw means a replay at North Ferriby on Tuesday night (29th September) and then attention turns from one FA competition to another. Aycliffe begin their FA Vase campaign on Saturday (3rd October) with a home game against Barnoldswick Town. Kick off at Moore Lane Park is at 3pm with admission £6 adults and £4 concessions. This season’s FA Cup run has already seen Aycliffe achieve its greatest result in a 50-year history. They’ll be hoping to continue that form into the FA Vase.