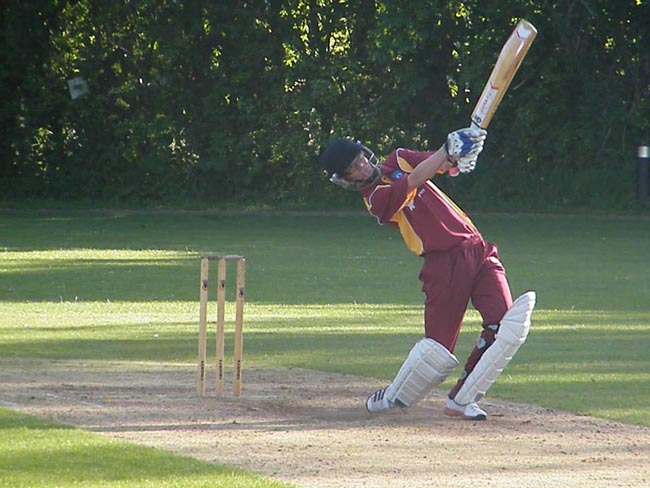 Newton Aycliffe again sailed to another victory – this time with record-breaking innings!

Despite being asked to bat first by Darlington RA’s third team last Saturday, Aycliffe’s first team racked up 344 for six before declaring after 42.5 overs.

Eighteen-year-old batsman Sam Telford (pictured) chalked up an impressive, unbeaten 129 off just 105 balls, including 17 fours and one six, to later bag the man-of-the-match award.

Chris Palmer also notched 58 and Michael Howe 38 with the bat in cloudy, cool and windy conditions.

Aycliffe then skittled Darlo RA out for 87 from 27.3 overs, with Michael Howe taking five wickets for 19 to cap off a fine all-round performance. Luke Telford also took two for nine and Dan Craggs two for 15.

“There was Newton Aycliffe’s biggest ever victory margin, winning by a massive 247 runs, and also the tremendous personal milestone’s of both Sam Telford and Michael Howe.”

The easy win consolidated Aycliffe’s seventh-plac in the middle of the NYSD third division, having won six, drawn one and lost three.

Aycliffe’s season in the NYSD continues this week, with the Aycliffe Hogs playing their first game in the 15/15 Cup at home to Sedgefield’s second XI.

The first team continue their league campaign at Bishop Auckland on Saturday (1.30pm), against their third team, while Aycliffe’s second team go to Hartlepool this Sunday to play their third team.