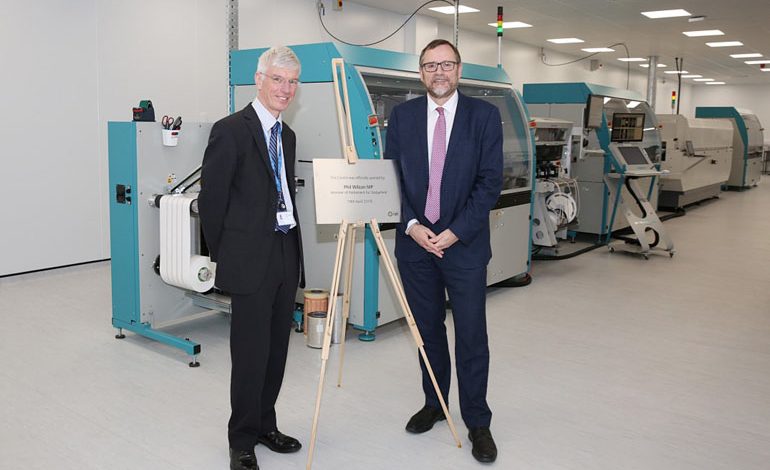 The Centre for Process Innovation (CPI) has opened a state-of-the-art facility on Aycliffe Business Park to help companies exploit opportunities using the Internet of Things.

The printable electronics centre is expected to support a number of developments, including self-monitoring packaging capable of tracking sensitive medicines in the healthcare sector.

Expected to be worth up to £10.8 trillion a year by 2025, the Internet of Things connects devices via the internet, allowing them to send and receive data, and is seen as an integral platform in helping electronics companies develop new business models.

The CPI facility, which supports 20 jobs across new and existing roles, will create rolls of thin, flexible inlays containing multiple electronic components that can be converted into labels or embedded into smart products or wearable goods.

Such functions are already being used in the distribution of temperature sensitive medicines.

The Aycliffe printable electronics base is an extension of CPI’s National Printable Electronics Centre at NETPark, in Sedgefield.

“Thanks to these new resources, CPI is now uniquely placed to provide clients with thin, flexible electronics at an unparalleled scale on an open access basis,” he said.

“With the Internet of Things developing fast, CPI is now even better prepared, with this investment in design and manufacturing capability, to meet future technological needs.”

Josephine Charnley, co-founder of Quantum Technology Supersensors, which received support from CPI to launch a new sensor, said the help has been invaluable.

She added: “Our ‘environmentally-friendly’ printable inks, which can create smart pressure sensing surfaces and 3D Force Touch without costing the earth, have had an incredible launch with CPI’s assistance.

“Its first-class facilities have enabled us to develop our new products, which have just won two awards in Europe.”

He said: “I want to see companies and organisations that offer cutting-edge work and are creating jobs have a place to flourish.”

“CPI has a good track-record of doing that and I want to see Aycliffe Business Park go from strength-to-strength.”

CPI’s centre expansion was funded with £2.6m from the European Regional Development Fund.

Further funding was also contributed by CPI via the Catapult programme and the SCOPE project: a collaborative project involving industry and co-funded by the Advanced Manufacturing Supply Chain Initiative.