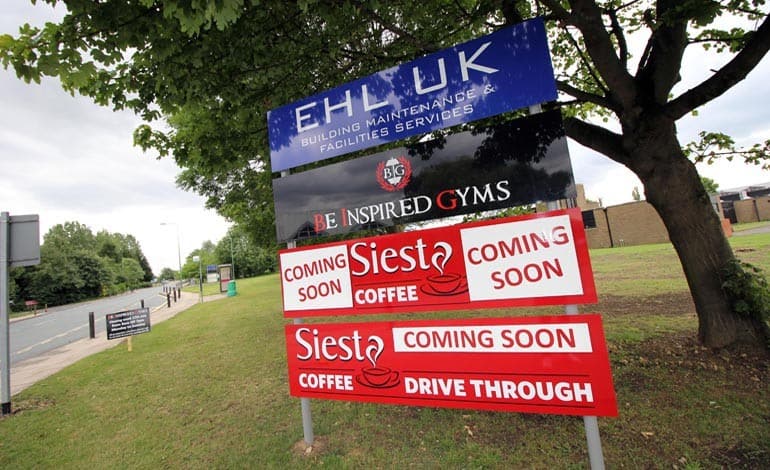 The launch of a new gym in Newton Aycliffe has sparked anger after it opened this week without planning consent.

But the owners went ahead with the opening this week, attended by Sedgefield MP Phil Wilson, despite not having the necessary planning consent from Durham County Council.

The local authority has turned a blind eye to the development, saying it will consider EHL’s retrospective application.

It has angered nearby businesses, some of which had to go through a rigorous planning process, including a mixed-use leisure application which was turned down eight times.

EHL finally submitted plans to Durham on 1st June, applying to change the use of its building on Durham Way South from an adult education and rehabilitation facility to mixed use comprising office accommodation, a fitness gym and cafe.

Labour MP Mr Wilson officially opened the new facility on Friday – despite knowing it didn’t have the relevant consent.

OneGym eventually opened on Durham Way South in April 2014 after first being rebuffed by Durham Council.

Other developments – including the new ROF 59 leisure facility due to open soon and Aspire Fitness among others – had to “jump through hoops” to get the necessary consent.

And the popular family entertainment venue Planet Leisure was only successful with its application four years ago at the ninth attempt.

OneGym director David Pearson told Aycliffe Today: “We would like a detailed explanation as to why our initial planning application was declined, and it took us well over 12 months to get approved, whereas now it seems anyone can come and erect signs, open businesses, chop down trees and advertise anything without any initial consultation from the local authority.

“We would also like an explanation as to how a local MP, Phil Wilson, can actually open the business without them having received formal planning permission.

“It makes an absolute mockery of the planning department. If I could turn back time, I certainly wouldn’t jump through the hoops we were made to jump through.”

Planet Leisure owner Darren Peckitt added: “I can’t understand the council’s position, but the business park is becoming more mixed-use now, so they are probably more sympathetic to applications now then they were when I was applying for ours.”

Durham County Council initially told Aycliffe Today EHL could “technically open, but still had to await a decision on their retrospective application”.

But in a subsequent statement, planning development manager Stephen Reed said: “Planning law allows people to submit retrospective planning applications and specifies that we must judge them in the same manner as all other applications.

“We cannot prevent people carrying out work without permission. If an applicant does not receive permission for work they have already carried out then we will take action.”

Mr Wilson told Aycliffe Today he was confident EHL’s planning issues would be resolved next week.