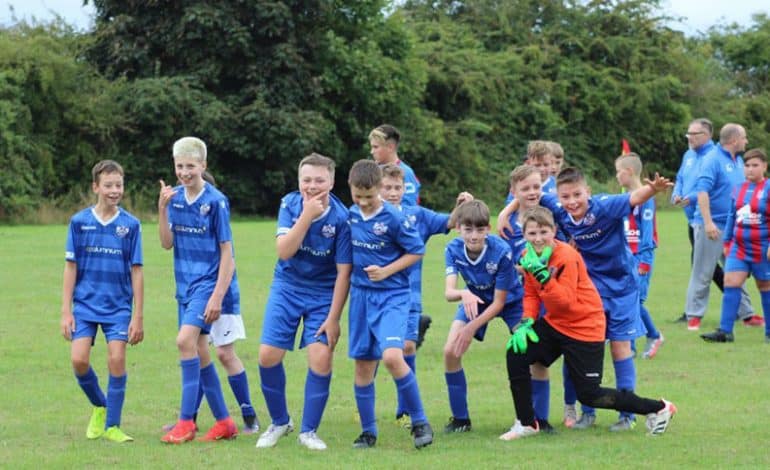 It was a welcome return back to grassroots football after the summer break for NAFC Junior Section at the weekend.

As per FA regulations this season, we will not be reporting actual scores for teams aged U11 and under.

U9 Whites met with Hebburn Town Juniors Valencia. Harry scored a fantastic goal early in the game and the team had some great efforts on goal in the second half. MOTM went to Ellis for his outstanding efforts throughout the game.

U10 Juniors were host to Darlington FC. A goal from Sammy in the first half and a fantastic goal from Dom in the second half but the juniors unfortunately didn’t get the result they wanted at the final whistle. MOTM was awarded to Mason.

U10 Blacks had an energetic first game v Wear Utd Devra with some great football played between both teams. A determined display from the juniors saw goals from Rhys, Charlie, Harry and Olly. A great start to the season with MOTM awarded to Rhys who never gave up and was committed to winning every ball.

U11’s were host to Bedale in their first competitive league game in 18 months due to the pandemic. The result didn’t go their way but a great effort from the whole team. MOTM was awarded to Seth.

U12’s got off to a great start with a 4-2 home win v Marske Utd. The juniors were 2-1 down at half time but showed real character and battled back scoring 3 fantastic goals in the 2nd half. Two goals from Keaton and one each from Theo and Callum. MOTM was awarded to Keaton.

U13 Whites started their season in style with their biggest ever recorded victory. Hosting South Park Rangers and putting balls through in impressive form the juniors went into half time 7-2 up. Second half was similar, creating multiple opportunities, ending run away winners 12-3 with 5 goals from new signing Noah, 4 for Ethan, 2 for Oliver and 1 for Jayden. MOTM was awarded to James for working tirelessly down the right wing.

U13 Blacks were host to Wreckington Nou Camp Orange. The first half was fast paced with some great football but no goals. The away team had a strong defence and a great keeper but Alex finally hit the back of the net in the second half, with Wreckington equalising shortly after. Game ended 1-1, but a great effort from the juniors with MOTM going to Danny.

U15’s travelled to Saltburn and had a 3-2 lead when unfortunately due to an injury to one of their players the game had to be abandoned. Goals came from Travis, Jake and Ethan. This game will be replayed at a later date. Get well soon Travis!

U16’s started their league campaign at South Tyneside, with a strong squad featuring new additions. Aycliffe controlled the game from the start, hitting their opponents on the break with some good passing and pace. The two goals of the game came just before half time, Anthony scoring an excellent free kick from distance, before the opponents broke well and finished scored. Despite efforts from Ted, Bo, Anthony and Charlie, the winner Aycliffe deserved didn’t materialise. Joint MOTM went to Charlie and James.

A great start to the season for all teams and we look forward to next week with majority of our TJFA teams in League Cup action. It is great to see our players back enjoying themselves and some normality resuming in grassroots football following a very difficult 2020-21 season.