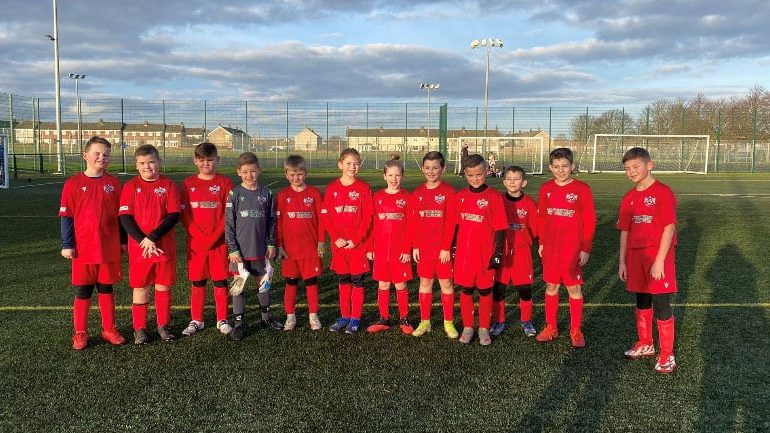 A round up of this week’s football from Newton Aycliffe Junior Section.

Development – Had a wonderful turnout with eighteen children attending a great training session provided by Jack. There were also considerable numbers at Under 7’s training with twenty children attending. The trainer of the week was Reggie won this on his very first night at training, well done Reggie!

Under 9’s Blacks – Hosted Hartlepool St Francis. A defensive error saw Aycliffe concede early, some good football was then played with Aycliffe hitting the bar. There was great celebration when Tyler Jay scored from outside the box. Unfortunately, the opposition where just too strong for Aycliffe, who put in a gutsy performance. MOTM Luca, who was outstanding in goal and made some very brave saves.

Under 10’s Whites – Played Washington PSG, Aycliffe put in a wonderful performance, with the opposition goalkeeper, keeping his side in the game. The goal eventually coming from a well worked free kick scored by Maxi. MOTM was Max

Under 10’ Blacks – Played against a well organised Coxhoe team. The Blacks took the initiative by scoring three early goals through Rhys, Oliver, and Benjamin. The game then settled before Oliver grabbed a fourth before half time. Coxhoe scored a goal before Harry, then Benjamin scored again. MOTM was Benjamin who grabbed a brace a played well throughout.

Under 10’s Juniors – Played a 9v9 friendly away to Seaton Carew. After a shaky start, Seaton took an early lead before Aycliffe managed to settle into the game for much of the rest of the half. In the second half we played some good football at times, but tired legs & with substitutions saw Aycliffe lose shape and concede more goals. A good first effort at 9v9.

Under 11’s – Travelled to Hartlepool Pools Youth Whites, a controlled performance assured Aycliffe the win. In a game they dominated, goals come from Evan (2) and Archie. MOTM Evan

Under 12’s – Played Skelton Utd, some good football was played with Aycliffe creating numerous chances. It was the opposition however who took the initiative scoring three goals. The 3-0 loss was hard to take after the level of performance. MOTM Alex

Under 13’s Blacks – Played a strong Washington Blues, having only twelve players available for selection. An early goal from Danny, seen Aycliffe dominate the first half. There was an injury to Keaton, before Danny scored a wonderful free kick. Washington however come back strong and grabbed two goals to end game 2-2. MOTM was Danny.

Under 13’s Whites – Without a league game, the team played a friendly against Eaglescliffe Elementis. An experimental line up saw James open the scoring, before Eaglescliffe were awarded a penalty 1-1 at half time. Reverting to normal positions in the second half, Aycliffe scored six without reply from Jayden, Sam, Ethan (2) and Thomas (2). MOTM awarded to the full team.

Under 16’s – Travelled to face Durham Tigers. As has been the story of the season so far, Aycliffe dominated the game, with Archie and Liam testing the keeper, who made great saves. Durham took the lead near half time with a well worked goal. In the second half Aycliffe pressed without being able to find a goal. MOTM George Rose who was outstanding in goal.