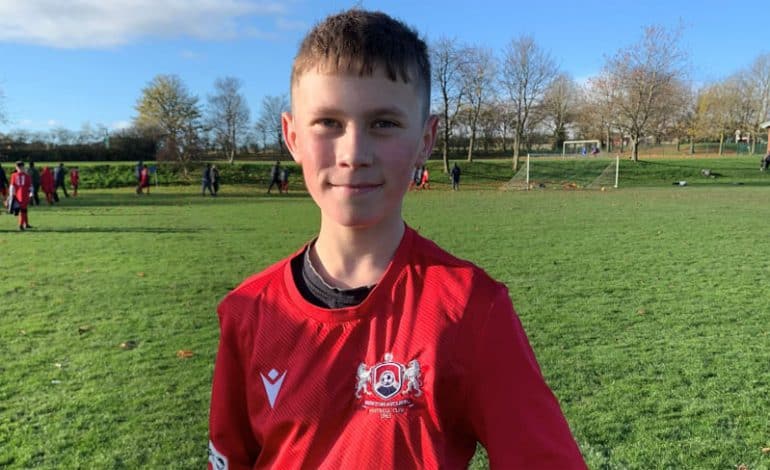 Under 12’s – entered the MFC Christmas tournament during the break. In a competitive tournament, Aycliffe ended up eventual winners. Playing six games overall and winning four of these, including a 2-0 win in the final v Coulby Newham. Goals on the day scored by James (4), Keaton (2) & Callum. Well done to the Under 12’s. Player of the tournament was Oliver who kept five clean sheets.

We welcomed back grass roots football this weekend, following the Christmas break.

Under 9’s Blacks – travelled to Billingham Synthonia. A fantastic long rage strike saw Billingham go ahead against the run of play. Aycliffe continued to work hard in the second half, Fin and Fletcher working tirelessly in midfield, but despite a few half chances we could not convert. Overall, a fantastic performance by all the lads. MOTM Findlay who was outstanding in defence.

Under 10’s Blacks – played against Shincliffe in a tough game. We got off to a great start and took the lead thanks to a brilliant goal from Oliver. The boys gave their all but unfortunately it did not go our way in the second half. Well done boys you all kept your heads up and battled on despite the freezing conditions. MOTM Mathis for his determination and great all-round performance.

Under 10’s Whites – played Washington Lions in a very enjoyable game to watch. Aycliffe were put under pressure, with goalkeeper Jensen pulling off some great stops. Aycliffe started to progress the play up the field better and grabbed a goal through a beautiful header from Jack.
Intense pressure saw Jack grab a headed goal before Oliver scored. MOTM Jack R

Under 10’s Juniors – travelled to Northallerton Town. Despite having a depleted squad, Aycliffe started well and broke the deadlock, from a corner taken by Maxi and far post volley from Ernie. Second half saw Aycliffe take control of the game Maxi setting up goals for Tyler and Marley. Sammy then set up a goal for Jonah. Magnificent work from all the lads. MOTM went to Maxi.

Under 11’s – travelled to TIBS yellow, in a game that Aycliffe controlled throughout. Some great play saw goals from Archie, Layton, and Declan. Great defending ensured a clean sheet. MOTM was Harry.

Under 12’s – travelled to Billingham Juniors. Aycliffe created numerous first half chances but could not find the net. In the second half Billingham really grew in confidence and scored a late winner. MOTM Faye

Under 13’s Blacks – hosted Shincliffe in harsh weather conditions, the lads played some great football and ended up winning 3-0 with goals from Robbie & Danny (2). MOTM Danny

Under 13’s Whites – travelled to Linthorpe. Ethan opened the scoring, before new signing Thomas scored his first goal, Ethan scored two more for his hat trick giving us a 4-0 lead at half time. In the second half, Thomas grabbed a second, Sam scored his first ever league goal. Linthorpe pulled one back, before Thomas rounded off his hat trick and then Noah scored two good goals to give us a 9-1 win. MOTM was Noah who was superb in midfield.

Under 18s – travelled to Kader today a team we recently beat 6-1 a, few weeks back. With only eleven players travelling due to covid and work issues. We lost the game 3-0. All three goals were gifts from us, with Kader not creating themselves. We missed numerous chances and could not find a way back into the game.