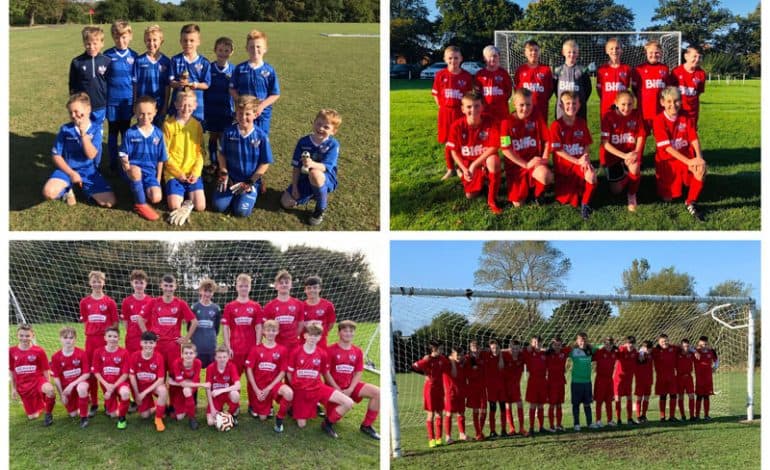 It was another action packed weekend for the NAFC Junior teams, with the clubs classy new Red away kit firmly on display, full round up below;

U9’s Blacks hosted Tibs Yellows, with a tense 1st half ending stalemate. 5 minutes after the restart Aycliffe took a deserved league. Regan broke clear and produced a fine finish. Tibs soon drew level with a scrappy goal then took the lead with a fine free kick. Aycliffe pressed for the equaliser but unfortunately couldn’t get the equaliser they deserved. A fantastic performance form the team. MOTM Regan H – excellent passing and work rate.

U10’s Whites played league favourites Washington in a very scrappy game. Washington took advantage of Aycliffe’s mistakes to take the lead, eventually Aycliffe got some momentum going the game and grabbed a goal back however it was too late in the game to recover. Aycliffe scorer was Jack & MOTM Max H for another strong performance in defence

U10’s Blacks travelled to an excellent Shincliffe side. The first half was tense with opportunities for both sides. The Blacks were organised, defended well and worked hard for each other, going in at the break level. The second half didn’t start well and we fell 4-0 down. We kept going and grabbed one back from Oliver’s great free kick. Benjamin got another late on, but unfortunately, we ran out of time. MOTM Oliver SL as he gave his all throughout the game.

U11’s were away to Hurworth today and despite having no subs today the lads put in a brilliant performance and came away with the spoils, all the goals were brilliantly worked. Scorers were Archie, Jack, & Seth.

U12’s go into the next round of the challenge cup after a hard fought 3-1 win over South Park Rangers. We should have been out of sight by halftime as we had so many chances. They got back into it at 2-1 but we then made it 3-1 with Theo finishing off a great goal. FT Rangers 1-3 NAFC scorers, Oliver, Callum & Theo. MOTM – Theo

U13’s Blacks played Shincliffe away, for what was, from the start a powerful performance. Straight from the off we scored 5 great goals first half and then second half grabbed 2 more, outstanding. Goals from, Danny R x3, Alex S x2, Keaton W x1 & Jayden H x1. Great assists and display from all the lads, denying the opposition any shooting opportunities, and all with the bare 11. FT 7-1

U13’s Whites hosted Thirsk Falcons. A really close game to start with no goals for first 15 minutes until Thirsk finished a goal mouth scramble. A wonderful long high shot from James drew us level but Thirsk went in 1-2 up at half time. Thirsk then a dominant spell putting away 4 goals in quick succession. Oliver converted a penalty to make the final score 2-6 to Thirsk. MOTM was Oliver for the second week running.

U15’s travelled to Saltburn today for our rearranged fixture after the first game there was abandoned. The lads burst into a 4 goal half time lead with goals from Trav 2, Ethan and Jake. Trav finished the scoring early in the second half to complete his hat trick with the game finishing 5-0 to Aycliffe.

U16s hosted Washington Juniors at Moore Lane this weekend. With only 12 available at KO, Aycliffe took advantage of the larger pitch, testing the Washington keeper from distance. HT and it was 0-0 despite Aycliffe’s pressure. 2nd half saw a flurry of activity from Washington, without creating any clear chances as Aycliffe held firm. The game was deservedly won by Aycliffe towards the end, with a great ball from midfield allowing Archie to break through and finish well from the edge of the box. FT 1-0 Aycliffe. MOTM: Shae, Goal: Archie

U18’s were away at Middleton Rangers. It was a poor performance and we never really got started. Rangers deserved the 5-1 win. Goal for Aycliffe scored by Evan T. We go again next week.