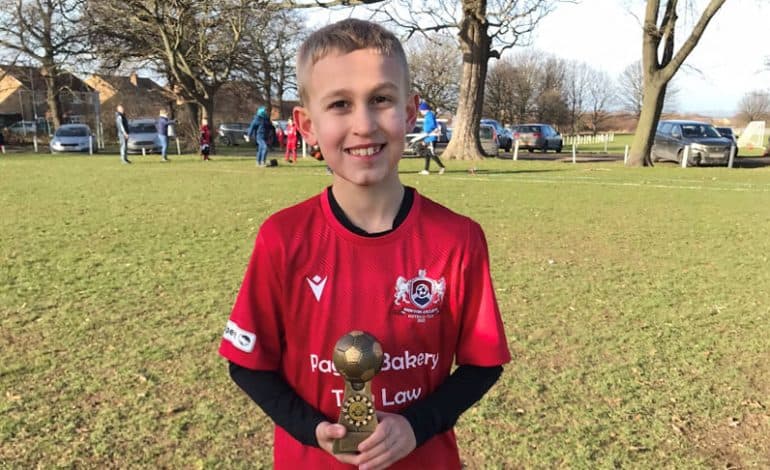 Under 9’ Blacks – Travelled to South Park Rangers, Aycliffe started off well, playing some good football. Aycliffe got their rewards early, a great passing move was finished off when Max drilled the ball through the goalkeeper’s legs. The game then became a bit scrappy, and Aycliffe lost their concentration, getting caught out, with South Park taking advantage of slack marking to equalise. The second half was fantastic, with both sides playing good football, Max hit the side netting and Fin went close with a free kick, but neither side could find another goal. It was two good sides who gave everyone in a thoroughly enjoyable game. MOTM – Max, all action display in midfield and a well taken goal.

Under 10’ Whites – Played Durham Colts, despite the winds, Aycliffe played really good football. In the first half Aycliffe had the advantage of the wind and managed to go into the break in the lead. In the second half, Aycliffe continued with the good football and extended the lead, before Durham grabbed a couple of consolation goals. Jack (2) and Oliver scored the goals. MOTM –Jack

Under 10’s Blacks – Played Hilda Park, in the tough conditions, both teams struggled to keep control of the ball. Alfie scored a wonderful free kick before the break. Playing against the wind in the second half, Aycliffe struggled and could not hold onto the lead. MOTM – Alfie for his wonderful free kick.

Under 12’s – With no league fixture, Aycliffe played their first 11v11 match in an away friendly v Hartlepool St Francis Royals. A strong first half performance was not rewarded with a goal and the game was 0-0 at half time. It was Aycliffe who took the lead after a great move, Alex passed to William who took the ball around two defenders then laid it off to Callum who fired home. St Francis equalised before Callum grabbed the winner. MOTM – Oliver

Under 13’s Whites – Travelled to Seaton Carew and come away with all three points to fire Aycliffe to Fourth in the table. An early break saw Thomas break through and finish well to give Aycliffe the lead. Seaton then equalised and it remained 1-1 at half time. In the second half, Aycliffe found an extra gear and pressed hard. Ethan delivered a great corner which saw James’s header cleared of the line. Trystan then pulled off an amazing save before Thomas again broke the defence with his speed to give Aycliffe a 2-1 lead. Aycliffe defended resolute until the end. MOTM –James who worked hard down the right wing.

Under 14’s Whites – Travelled to Tibbs and come away with a fine 2-1 win. In a wonderful performance from the whole team, Ollie and Jake scored the goals. MOTM – Brad

Under 16’s – Entertained Sunderland Rangers Blues, on a very windy morning. Playing against the wind in the first half, Aycliffe created good chances, then unfortunately conceded with a long punt in the wind. In the second half Aycliffe struggled with the conditions, before an error from the opposition goalkeeper, let Charlie in on goal to slot home the equaliser. The game then got a bit feisty, which resulted in a red card for the opposition. MOTM – Brandon, a fantastic performance from the captain