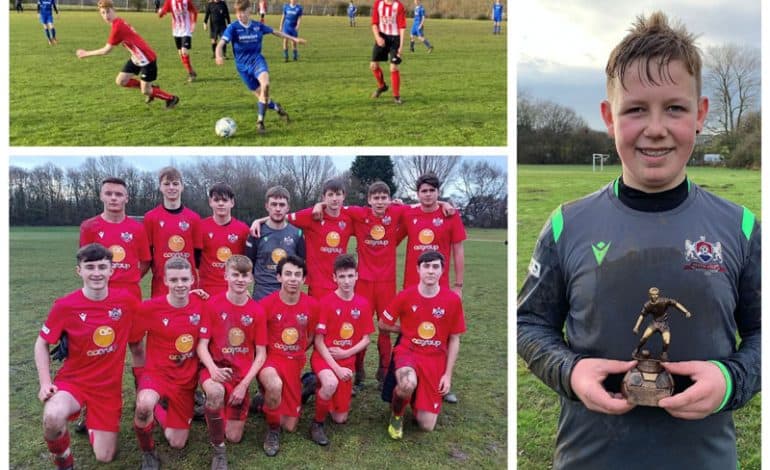 Under 9’s Whites – played Washington Athletic, the Whites started slowly conceding a sloppy goal early on. It did not take long to get going and a strong end to the first half ensued, with goals from Ryley and Oscar. The game ended in a draw, but overall, the boys never stopped fighting for the ball and worked hard throughout. MOTM was John who put in an impressive performance and played the unusual position of forward today.

Under 9’s Blacks – hosted Hartlepool Youth Whites in poor conditions. With players missing due to illness, the team put in an exceptional performance, but could not find the goal they deserved. Debuts were given to Liam & Tyler-Jay. MOTM was Max who played out of position as goalkeeper but put in a fantastic performance.

Under 10’s Juniors – travelled to Hurworth Juniors. Aycliffe played some lovely football Aycliffe went and led at half time. In the second half Hurworth pressed from the start & got a goal through a deflected cross. Aycliffe kept absorbing the pressure & hit Hurworth on the counterattack. Goal of the game came right in the final whistle, a superb cross across goal for Jonah to volley into the roof of the net. The goals scored by Tyler, Sammy, Marley, Jonah and an OG. MOTM went to the defensive 4 of Dom (GK), Daniel, Mason & Tyler for playing brilliant under pressure.

Under 10’s Blacks – played Blackhall Monks. In a tough battle, Aycliffe played good football, but unfortunately it did not go our way. The team created good chances but just could not find the back of the net. Aycliffe stepped up in the second half, creating good chances and battling well to the final whistle. MOTM went to Charlie for his confidence in the box and fantastic saves.

Under 13’ Whites – extended their unbeaten run to 5 with a hard fought 0-0 draw at home to Seaton Carew. Under pressure for large periods of the game, Aycliffe defended hard and tried to catch them on the counter. This match had everything but goals. Jack hit the post, Ethan had a shot saved, Josh had a header tipped away. MOTTM went to Trystan who made numerous great saves.

Under 15’s – entertained Guisborough in a mud bath of a pitch at Woodham. Starting brightly, the lads took a two-goal lead, with Travis grabbing both goals. Guisborough blazed a penalty over the bar on the stroke of half-time, meaning the lads led 2-0 at the break. Aycliffe started the second half quickly, with a goal coming from Jordan. Guisborough pulled a goal back, before Leighton burst through the defence to make it 4-1. Guisborough scored a late consolation goal to make it 4-2 to Aycliffe. The lads maintain their 100% start to the season with seven wins from seven.

Under 18’s – hosted Seaton Carew, who sat two places above Aycliffe in the table. Aycliffe dominated the game from start to finish on a boggy pitch. The lads led 2-1 up at half time with Josh G grabbing both goals. In the second half, despite conceding one more, we scored another four goals, Josh completed his hat-trick and Jack C also bagged a hat-trick. Aycliffe missed the opportunity of more goals, with the final score 6-2 to Aycliffe. MOTM Josh G.