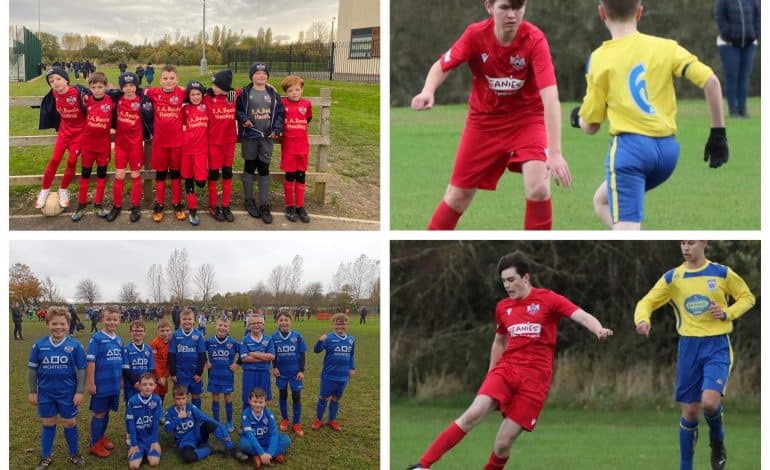 U9s Whites played crook on Saturday & were dominant first half and no idea how we didn’t find the back of the goal. 2nd half was a little slower, and despite goals from Harry C and William B it wasn’t to be our day. MOTM William, a fantastic defensive display.

U9 Blacks hosted Darlington Spraire Lads on Sunday. Aycliffe enjoyed a lot of possession, & finally broke the deadlock, Jacob with a good finish from a corner, then Regan finishing to put us two up @ HT. Second half and the conditions worsened, Darlington dominated and took home the spoils. Goals, Jacob & Regan, MOTM Fin C

U10’s whites played Durham City midweek, Coming away with the points. The first 10 mins were pretty sloppy going behind but then they started playing some fantastic passing football switching the play well, Goals from Jonah x3 , Oliver and maxi. MOTM going to Jonah H for his all-round performance. On Saturday they played Sunderland Ryhope, and although the boys took an early lead, they found themselves down at half time. 2nd half was slow again conceding more, then suddenly the boys woke and started battling and playing as a team and managed to secure a draw with 4 goals in the last 15 mins. Excellent battling. Goals Jack 4 and Jonah, MOTM was Tyler

U10’s Blacks, played a very strong unbeaten top of the league team. Each and every one of the boys gave 100% today, excellent passing, great goals, amazing saves and just all-round brilliant team play. A very close and very tense game but we kept our heads and got the result we deserved today! Goals, Oliver x2 MOTM went to the whole team today as they were all outstanding.

U11s were defeated by 1 goal at home to Hurworth Albion Greens in the cup who were a division above. Goal from Layton. MOTM Trent

U12s hosted in form Billingham lions on Sunday. In tough conditions both teams struggle to get any real chances before half time. The 2nd half started well the Lions keeper kept them in it. Alex was then brought down in the box after a fantastic run and Callum put away the penalty 1-0. Thomas then went past 2/3 lion’s players and chipped the keeper for a great goal FT 2-0. Goals, Callum x1(P), Thomas 1. MOTM – Alexander. Top of the table, well done everyone.

U13’s Blacks won 4-0 against Whickham Fellside Yellows on Saturday. First half was poor, but still nothing got past Harry. Second half was a totally different story, coming out wide awake and bagged 4 awesome goals. A great second half performance, with no subs. Well done lads. Goals Jayden 1, Robbie 1, Danny 1 & Keaton 1. MOTM Keaton

U15s lost their league cup game to current cup holders and top of the table Div1 side Seaton Carew this weekend. The lads gave 110% from start to finish in a really hard-fought match with the game finishing 3-0 to the visitors.

U16s hosted Bowburn Youth United on Saturday. In blustery conditions, both sides managed to get the ball down and play some good football, but sloppy defending resulted in Aycliffe conceding. A few positional changes in the second half saw Aycliffe playing a lot more on the front foot, taking the game to Bowburn and testing the keeper on a few occasions, but unfortunately weren’t able to pull level in the game – final score NAFC 0 – 1 Bowburn Youth United MOTM, Archie Marshall.