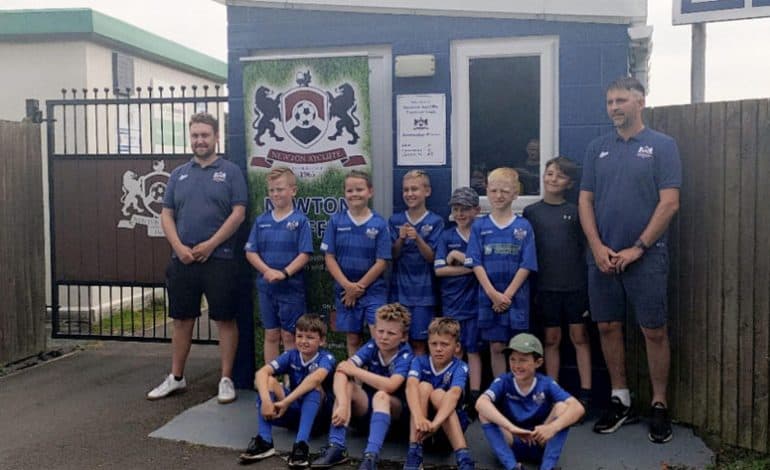 Under 7’s Reds – Entered into the Felling Magpies Tournament. The team did well, progressing out of the group stages, but unfortunately finished runners up in the plate final.

Under 7’s Whites – Played Darlington RA Hurricanes, in three separate small games, in extreme heat, the team did very well remaining unbeaten on the day and playing some wonderful football.

Under 10’s Blacks – Did not have a game this weekend, however the team did a sponsored six mile walk from Shildon FC’s stadium to Newton Aycliffe FC’s stadium. In red hot conditions Michael, Peter and the team completed the journey, where they were met with hot dogs and drinks at Moore Lane.

Under 13’s – Were in action at the South Park Rangers FC Summer Tournament. Aycliffe lost the first game 2-1 against Bishop Aces, despite taking an early lead through Huey. The second game was against Burradon, Aycliffe ran out 9-0 winners in this game. Goals from Callum (5), James (2), Odin (1), and Oliver (1). The third game was against Billingham Lions, this proved to be a real battle on the pitch, with the game ending 0-0. In the final group game, we lost out to local rivals Newton Aycliffe Youthy 2-1, with the goal coming from Callum. MOTM was James.

Under 13’s Whites – played in the Linthorpe tournament and a wonderful day of football was had. Topping the group after with an impressive 2-0-win, 1-0-win, 1-0 loss and 3-0 win seen Aycliffe progress through to the cup semi-final. Into the semi-final Aycliffe beat Chester le street 1-0 win to send the team into the cup final. Unfortunately, it was not to be Aycliffe’s day, losing out 3-0 in the final against a good Billingham side. The goals were scored by Tom (5), Jake and Jayden.