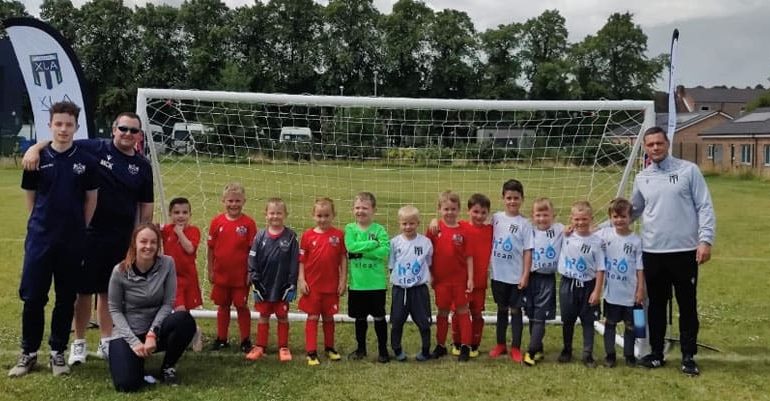 A round-up of this week’s football from Newton Aycliffe Junior Section.

Under 7’s Reds – Played against a very good AJX team and produced a wonderful performance. In hot weather conditions, the Reds played excellent, and all parents walked away feeling very proud.

Under 10’s Blacks – Travelled to Mount Pleasant Rangers, in a good game, both teams played some good passing football. Aycliffe’s front four of Jacob, Max, Jarrod, and Fin proved a real handful for the opposition. In a wonderful performance the goals were scored by Fin (3) and Jacob. MOTM was Jarrod who was outstanding in centre midfield.

Under 13’s – Played against AJX, starting in a new 3-5-2 formation. Aycliffe finished the first half 8-0 up, with the pick of the goals coming from Huey’s curling shot and Maguire scoring his first goal in match football. Into the second half, Aycliffe didn’t slow with Yaley moving to left wing scoring two fantastic goals. The final score ended up 12-1 to Aycliffe with goals coming from Keaton (5), Oliver (2), Yaley (2), James, Huey & Maguire. MOTM was Yaley.

Under 14’s Whites – Hosted Darlington Young Bulls, experimenting in new formations and new players playing in non-familiar positions, Aycliffe saw this game as an opportunity to learn. Aycliffe took the lead after just one minute as Sam beat the keeper through a body of defenders. Darlington equalised 13 mins later, but Aycliffe were then awarded a penalty which Sam converted nicely to make it 2-1. In the last minute of the first half, Darlington then equalised through a penalty. In the second half, Aycliffe created numerous chances, but the Darlington keeper made some great saves. Aycliffe then had 20 minutes of madness, where Darlington scored 3 goals. Tom pulled a couple of goals back, and in a thrilling last couple of minutes, Aycliffe just could not find the equaliser. Final score was Darlington 5 Aycliffe 4. MOTM was Sam.

Under 15’s – Travelled to Walker Central, coming away with an impressive 5-2 victory, with goals from Brad (2) and McKenzie (3).

Under 18’s – Played their 2nd preseason game at home today against Redcar Athletic, grabbing their second win. We welcomed several new players and threw them straight into the action. The whole squad played their part today and first half especially played some quality football. Callum and Josh were our goal scorers in what was a good game. The visitors scored from a penalty, but Aycliffe looked strong on every part of the pitch.