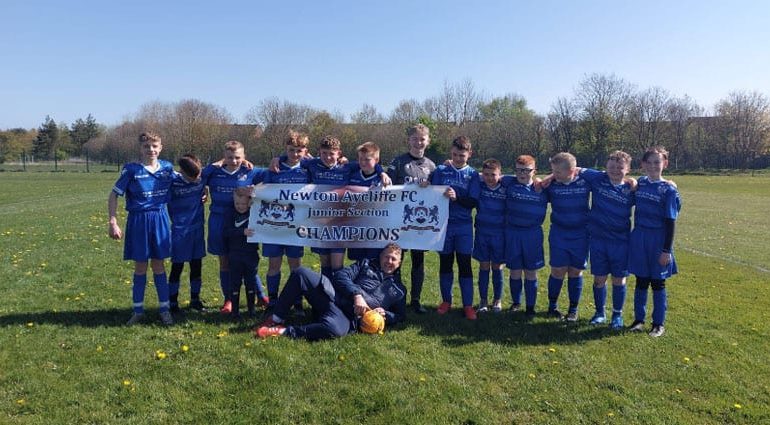 Under 9’s Blacks – Travelled to Mount Pleasant Rangers for a friendly, Aycliffe made numerous changes, and this paid off with a fantastic performance. MOTM was Fin Cochrane who scored all four goals.

Under 10’s Juniors – Finished the season with a 1-1 draw at home to Boro Rangers Madrid. Aycliffe played well in the first half but could not convert their many chances. In the second half Boro took the lead but Aycliffe kept pushing & Mason equalised from a corner. MOTM was Mason.

Under 10’s Blacks – Played Whickham Fellside, in a tough game, Aycliffe showed great determination and scored two good goals through Harry and Ashton. MOTM was awarded to the whole team for a great display.

Under 11’s – Hosted Billingham in their final game of the season, in what was a good game of football, Aycliffe twice came from behind and scored some great goals from Archie, Evan, Sam and Alex. MOTM was Trent for his fantastic distribution and handling today.

Under 12’s – Entertained Hurworth Albion in a 11 a side friendly, losing 2-1. Keaton scored Aycliffe’s goal. MOTM was Logan who was outstanding in goal.

Under 13’s Blacks – Travelled to Seaham Town in the penultimate game of the season. Aycliffe started strongly and it was Danny who opened the scoring to make it 1-0, before Seaham fought back and equalised before half time. Some great skill by Keaton, seen him go past the Seaham defence and cross to Danny who finished to make it 2-1 to Aycliffe. MOTM was Keaton.

Under 13’s Whites – Played a friendly away to Coxhoe Utd. Falling behind early, Aycliffe then started to play, with Thomas equalising. The teamwork and movement were good but could not score. The game finished 2-1 to Coxhoe. MOTM was Sam.

Under 14’s – Entertained Spraire Lads at Moore Lane, narrowly losing 3-1, with Niall scoring the goal. Aycliffe played some great football but did not take the chances created. MOTM was Connor.

Under 15’s – Hosted Darlington RA at Moore Lane in their final home game of the season. The recently crowned champions started strongly passing the ball around well and were 4-0 up within 25 minutes with goals from Jordan, Leighton, and a brace for Travis. RA come out stronger in the second half and a couple of mistakes at the back allowed the visitors to pull score back to 4-2. The victory makes it 17 in a row, with one game remaining.