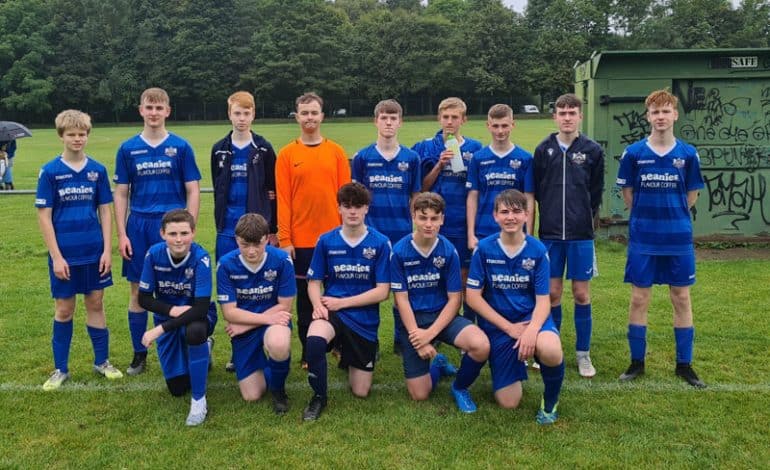 U9’s Blacks put in a very assured performance against Boro Rangers Reds in the League Cup and never stopped competing all game, unfortunately it wasn’t there day. Man of Match being awarded to Finley.

U9’s whites faced silks worth and hall farm and produced some really encouraging passing and movement in the second half especially. Although it wasn’t to be their day, there were positives to take from the game MOTM was a tough one but goes to Ryley for his improvement on the pitch, Massive well done all the boys though!

U10’s Juniors were dominant away @ Skelton. 2 goals in the first 5 minutes, Marley setting up Charlie & Ernie for the goals. We got another 2 before half time, Marley again creating for Tyler to score. Then Jonah set Charlie up for his 2nd. 2nd half, Skelton scored but the boys didn’t let it affect them & went on to score 2 more. A cross from Daniel setting Dom up to flick it home & a great ball across the box from Mason for Jonah to finish. A great all round performance. MOTM Marley

U11’s lost to a very good Boro Rangers blues in the cup. Evan grabbed a great goal & MOTM was Jack

U12s faced Billingham Hornets away in the cup. We started well and both sides had early chances. Hornets took the lead but we grabbed one back, Alex scored making it 4-1 at half time. Callum slotted one away second half, 4-2. Hornets grabbed another against the run of play, then Ethan smashed one home, 5-3. Unfortunately we just ran out of steam and Hornets went on to score 2 more. Proud of how our players played with respect all game FT 7-3 Hornets. Scorers, Alex, Callum, Ethan. MOTM James

U13’s Blacks were Fantastic at home to Deerness Valley Storm. Playing some superb football, Jayden & Alex both scored to take us 2 nil up at HT. A Second half jumble about, seen us score 3 more, Cody with a stormer & Danny boy grabbing 2. All lads were outstanding & with signing Robbie fitting in great. Proud coach to see the lads passing so well and sharing the goals. Well done all, FT 5 nil winners

U13’s whites faced Division 1 Boro Rangers Green. The score line was probably inevitable and Rangers were run away winners, but we got 1 goal scored by Henry. Aycliffe never gave up despite the score line so all the team were awarded man of the match. Credit to Borough players who not once showed any lack of respect despite the gap in ability.

U14’s travelled to Guisborough in the first round of the league cup and produced a quality performance, running out 11-2 winners, scorers were, Tyler S x6, Niall x2 Tyler R x2 Aidan x1. MOTM was awarded to Connor!

U15s travelled to Skelton Utd this afternoon, we travelled with only 12 players available players due to injuries and illness. We won the game comfortably coming away 14-0 winners with the goals coming from, Reece x 4 Leighton x 4 & 1 each for Jake, Tom, Jordan, Alex, Cole and Josh, well done lads, continuing last season’s great form.

U16s played Annfield Plain at home in their first game of the season. Anthony gave us the lead with a deflected cross in minute 1. Annfield began to get a foothold in the game, and equalised shortly before halftime. We started the 2nd half poorly, Annfield both taking the lead then going further ahead, giving them a 3-1 lead. Aycliffe dug in however, dominating the final 25 minutes, the best we have played in a long time. Matthew pulled the score back to 3-2, following in in to smash home. Brandon then won a penalty following a “meaty” challenge, seeing Charlie equalise from the spot. We were unlucky not to go on and take all 3 points, FT 3-3. Scorers, OG, Matthew, Charlie.

U18s had their first league game today at home to Northallerton…..a tense hard fought game resulting in a 3-2 win. Couldn’t ask for any more from the lads today…..2 goals from Lewis H and one from Evan T seen us home …fantastic result considering we had 7 players 6 weeks ago.