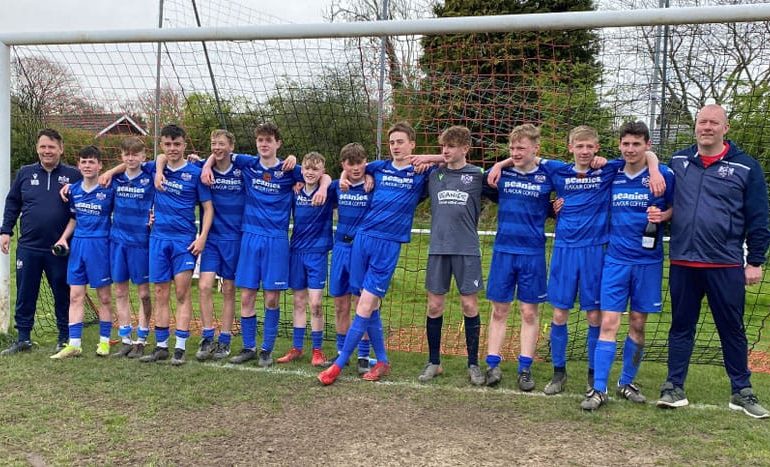 Under 6’s Juniors – Faced Chilton in a very entertaining game with goals coming from Lincoln, Reign, Colton, and Felix. MOTM was Felix.

Under 6’s Reds – Played a great game against Darlington RA, with Joseph scoring a wonderful hat-trick.

Under 8’s – Played their first ever games in three, twenty-minute matches against Darlington RA. Aycliffe produced lots of goals from Joseph (3), Bobby (2), Jace (1), Louis (3), Charlie (3), and Fletcher (2). MOTM was Bobby.

Under 9’s Whites – Played against Chester-Le-Street, in a frustrating game, Aycliffe missed chances, with William, Oscar, Ryley and Harry all going close. Aycliffe goalkeeper Seth made some fine saves. MOTM was Josh Ouston.

Under 9’s Blacks – Ended the league campaign at home to Leven. Aycliffe gave a great account of themselves throughout against a good Leven side. MOTM was Findlay.

Under 10’s Juniors – Travelled to Darlington FC, after a flat first half, Aycliffe changed formation which saw Dom grabbing a goal. MOTM was Marley.

Under 10’s Blacks – Played against Hilda Park in an entertaining game, with goals coming from Benjamin, Harry, and Alfie. MOTM was shared with Harry and Charlie.

Under 12’s – Travelled to Coulby Newham, with a depleted squad. Callum opened the scoring with his 20th goal of the season. Coulby Newham pulled the game around taking a 3-1 lead, before Keaton pulled a goal back, Aycliffe pushed but could not find the equaliser. MOTM was Odin.

Under 13’s Blacks – Travelled to Ouston Eagles, coming away with a 1-0 victory thanks to a goal from Al, who jinked his way past five defenders before finishing well. The victory secures the league title with two games to spare, with the team still unbeaten throughout the season. Well done to Mark and the players.

Under 14’s – Travelled away to Spraire Lads and narrowly lost 2-1 in a tight game, with Aycliffe missing a last-minute penalty to equalise. Josh scored the goal. MOTM was Jake.

Under 15’s – Travelled to Ripon City Panthers, coming away with a fantastic 2-0 win, in what was a very tense game. The goals both come in the second half from Leighton and Travis. The win secured the league title and back-to-back promotions for the Under 15’s, whilst maintain a 100%-win record that stretches back over two years. Well done to Mark, Simon, Gaz, and the players.

Under 16’s – Beat a good Waldridge Park Glanton side 2-1 at home, Aycliffe took the lead with a good header from Liam. Waldridge Park equalised, before Anthony Mac grabbed a deserved winner. MOTM was Charlie.

Under 18’s – Travelled to Coulby Newham, with a depleted squad, Aycliffe had only ten players available. Aycliffe played the better football but did not take their chances and eventually lost 2-0. A disappointing result on the last day of the league season.