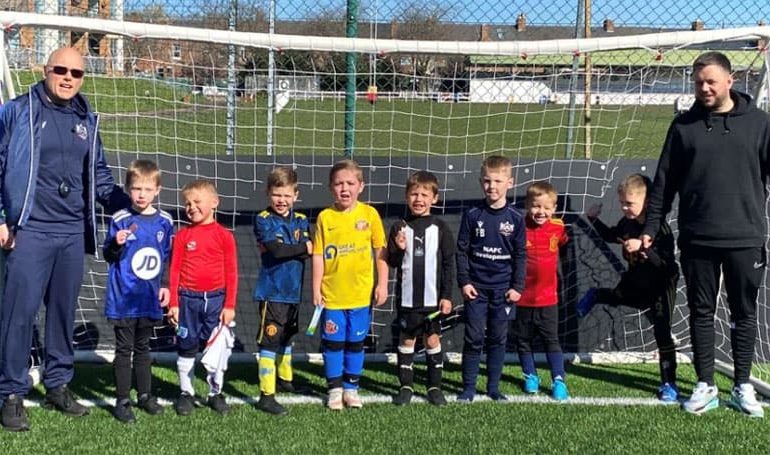 Under 6 Juniors – Had two practice games against Herrington. Aycliffe battled hard in the first game against a good team, in the second game Aycliffe got a well-deserved draw with goals from coming from Lincoln, Reign, Colton and Felix. A great learning curve for the team and lots of smiles at the end. MOTM was Reign in game one and Zach in game two.

Under 9’s Whites – Played Seaton United Stags, in a great performance Aycliffe just could not find the goal they deserved, with William, Oscar & Ryley all going close. MOTM was Harry Lee.

Under 9’s Blacks – Hosted Riverside Juniors, it was a close first half with Aycliffe going close on a couple of occasions. Into the second half Aycliffe had their backs against the wall and could not find a goal. MOTM was shared by Liam Baird and Tyler-Jay Towers. Liam was excellent in midfield working hard throughout and Tyler-Jay made some great saves in goal.

Under 10’s Juniors – Had a double header this week facing both Eaglescliffe and Hurworth Juniors. At home to Eaglescliffe, Aycliffe played well against tough opposition, Jonah grabbed a well-deserved goal and won the MOTM. Against Hurworth Juniors it was another excellent performance with Aycliffe leading early with goals from Jonah & Daniel. In the second half Hurworth pressed, but Aycliffe come away with a huge win. MOTM was Jensen who made some fantastic saves.

Under 12’s – Travelled to Skelton United, Aycliffe come away with a wonderful 4-2 victory in their best performance of the season. Goals from Keaton (2), William & Callum who grabbed his nineteenth goal of the season. MOTM was Alexander.

Under 13’s Whites – Played local rivals Ferryhill in the last game of the season. In a dominant display Aycliffe won 8-1 with goals scored by James (2), Tom (2), Ethan, Henry & OG (2). Aycliffe finished in a well-deserved 4th place finish in the league. MOTM was Noah who was influential in midfield.

Under 14’s – Drew 2-2 away to Boro whites, in an excellent performance Aycliffe deserved the three points, but a last gasp equaliser denied them this. Jack C and Mason scored the goals. MOTM was shared with Brad and Connor.

Under 15’s – Made the short trip to Darlington RA on Sunday and the performance did not disappoint, Aycliffe come away with an impressive 3-0 win with goals from Travis, Leighton, and Jordan. This continues the 100% record this season. Both the league title and promotion are now firmly within sight for a second season running.

Under 18’s – Hosted Coulby Newham at Moore Lane, in an impressive performance Aycliffe come away with a 5-0 win. Josh G grabbed a hattrick, along with further goals from Dec S and Jack C in an overall superb display of passing football.