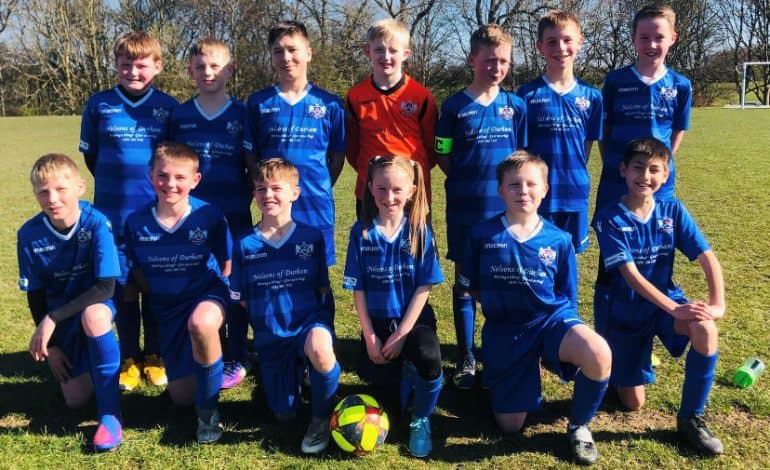 Under 10’s Blacks – Played Shincliffe, Aycliffe started well, but unfortunately lost a little momentum as the game went on. Aycliffe kept battling and scored two goals through Harry. MOTM was Rhys for his energy and assists on goal.

Under 10’s Juniors – Entertained Riverside Juniors in a close hard-fought game. Aycliffe fell behind, before a great ball from Jonah saw Mason hammer it home to equalise, with almost the last kick of the game. MOTM Ernie for his effort throughout.

Under 11’s – Travelled to Billingham. In a physical game, Aycliffe battled well and played some good football. A wonderful team move resulted in a goal for Archie, Aycliffe spurned further chances in the second half.

Under 12’s – Entertained Prissick Rovers, in a game that could decide league places at the end of the season. It was Aycliffe who dominated the game, winning 3-0. Goals come from Alexander who finished after a great run from Callum, Oliver scored next with Callum getting another assist. Keaton finished the scoring after great link up play from Alexander and Callum. MOTM was Jamie.

Under 13s Whites – Extended their unbeaten run to seven games with a superb performance against Linthorpe. In a 5-0 victory the goals come from Tom, Sam, Ethan, Noah, and Jack. MOTM was Ethan who got three assists and a goal.

Under 13’s Blacks – Travelled to Durham Tigers, starting with a new formation, Aycliffe dominated the game and come away with a 5=2 win, goals coming from Alex (2), Danny (2) and Robbie. MOTM was Keaton.

Under 16’s – Entertained Shotton Colts, grabbing a valuable 3-1 victory. In an entertaining game, Aycliffe looked threatening throughout. Charlie scored a header, Anthony scored on his first game back for Aycliffe, from a Liam assist & Archie finished the scoring from another Liam assist. MOTM was Liam.