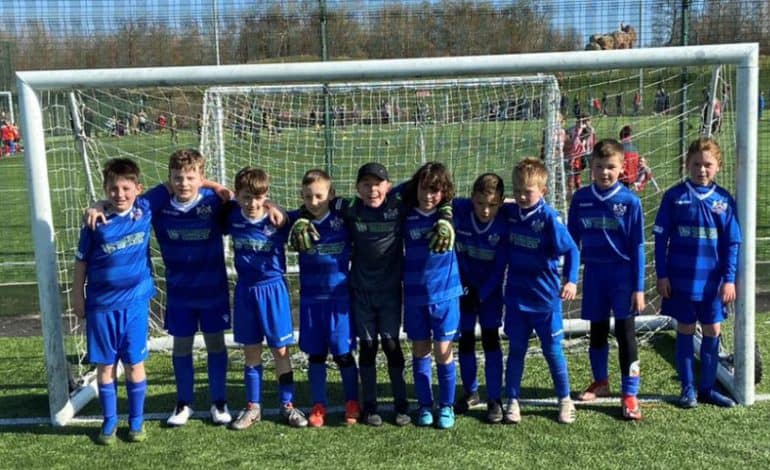 Under 9’s Blacks – Travelled to Riverside Juniors Madrid, Aycliffe found the going tough in the first half, but improved in the second half with Jarrod scoring a volley. Fin scored a penalty for Aycliffe, but it wasn’t enough. MOTM was Jarrod for his work rate and fantastic goal.

Under 10’s Whites – Come out on top in a tough fixture against South Shields. Aycliffe battled hard for every ball from the off, Oliver scored a great goal in the first half. Jensen was in sparkling form in goal, pulling off numerous saves. In the second half, South Shields scored, but Aycliffe kept to the game plan and attacked with speed on every occasion, eventually the important goal was scored by Tyler. MOTM was Maxi and James for constant running and battling.

Under 10’s Blacks – Played against Velocity, following an even start with limited opportunities, Velocity grabbed a couple of goals before half time. Aycliffe started brighter in the second half and scored through Harry, with momentum on Aycliffe’s side, James scored to equalise. Rhys scored next with a great finish, but Aycliffe couldn’t hold the lead and conceded late on. MOTM was James for his great finish.

Under 10’s Juniors – Travelled to Guisborough, the first half was very flat, Aycliffe were much improved in the second half with Dom hitting the woodwork twice, before more chances went begging. MOTM was Marley for a strong performance in several different positions.

Under 11’s – Travelled to South Park, Aycliffe worked hard, in a very entertaining game, with goals from Alex and Archie. MOMTM was Sam.

Under 12’s – Entertained Kader FC, Aycliffe took the lead with a magical back-heal from Alexander to set up Callum who scored. William made it 2-0 after a fantastic run down the left wing, William scored again with a fantastic shot from 20 yards out. Ewan made it 4-0, before Callum scored his 2nd to make it 5-0 at half time. Aycliffe created chances in the second half with James hitting the cross bar and Keaton having his shot saved. MOTM was William on his first start with two goals and an assist.

Under 13’s Whites – Put in their best performance of the season, beating second placed Greatham 2-1. In an even first half, it was Ethan who broke free but seen his shot saved. Into the Second half, a great kick from Trystan, saw the Greatham keeper miss the ball, which fell to Thomas who slotted home into the empty net. Greatham equalised immediately, before Aycliffe got their just rewards when Thomas finished well.

Under 14’s – Drew 2-2 at home with Tibbs in an excellent game that could have gone either way. Brad and Niall scored the goals. MOTM was Harvey.

Under 15’s – Travelled to Eaglescliffe and come away with a convincing 6-2 victory. Aycliffe played excellent football, with Travis scoring a first half hat-trick, before the hosts pulled one back. Into the second, Aycliffe moved into a 5-1 lead with great solo goals from Ethan and Leighton. Eaglescliffe pulled one back, before Sam completed the scoring with what could be goal of the season contender, with a half volley into the top corner from 30 yds.

Under 16’s – Travelled to Shotton Colts, in the 2nd Round of the RFYL League Shield. Aycliffe took the game to Shotton, with Anthony and Archie going close. Into the second half, Charlie scored a fantastic volley to give Aycliffe the lead. Shotton equalised against the run of play, before a superb ball from George released Liam on the right wing, his cross found Taylor with a diving header to make it 2-1. Shotton equalised again, then Archie went close, before the hosts scored late on to win 3-2. MOTM was Charlie Walton.