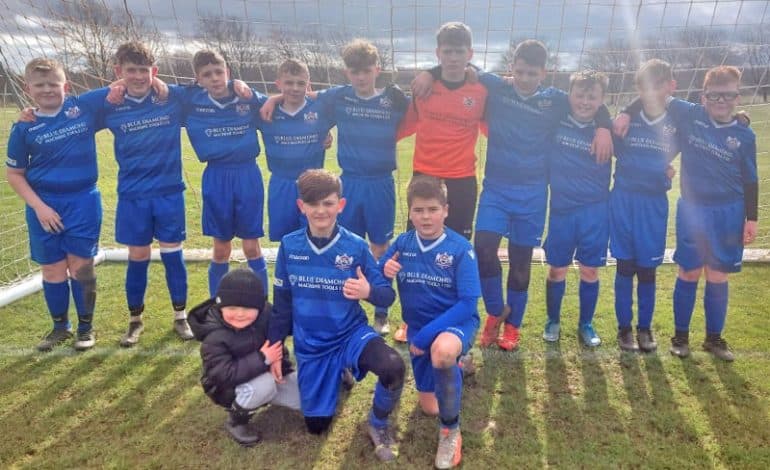 Under 9’s Whites – Played Herrington FC Greens, Aycliffe went in at half-time level, the link up play between William & Oscar was fantastic. In the second half, another excellent volley from Oscar’s beautifully placed corner gave Aycliffe the lead, but Aycliffe found the going tough after this, but never stopped competing. MOTM William Beale.

Under 9’s Blacks – Hosted Prissick Rovers, hoping to reverse the defeat from the reverse fixture earlier in the season. Despite creating numerous chances Aycliffe were behind at half time. In the second, Aycliffe played some wonderful football and were rewarded when Fletcher broke clear produced a lovely finish into the roof of the goal. Aycliffe couldn’t add to their solitary goal but there was massive improvement shown. MOTM Fletcher Noble, who worked hard up front and took his goal superbly.

Under 10’s Juniors – Travelled to Riverside Juniors, in a tight game, Aycliffe couldn’t manage a goal and were edged out by their hosts. MOTM Daniel.

Under 10’s Blacks – Played against NSG Athletic, Aycliffe were a little slow off the mark today and trailed at half time. In the second, Aycliffe took control of the game with some lovely passing which resulted in great goals from Harry (2) and Rhys. MOTM Olly for his strength and determination in challenging for every ball.

Under 11’s – Hosted Pools Youth in a close game, however it was Aycliffe who prevailed with two goals from Archie. MOTM Alex.

Under 12’s – Travelled to face North Ormesby, Aycliffe started poor and went behind, before Ormesby doubled the lead. Aycliffe responded with Ethan scoring, before Ormesby scored again to lead 3-1 at the break. Substitute Keaton looked threatening on the ball and Aycliffe scored when Callum set up Alexander to finish. It was Callum himself who grabbed the equaliser with a header. Keaton then scored an incredible goal, to give Aycliffe the lead and rounded the scoring off himself to make it 5-3 to Aycliffe. MOTM Keaton, unbelievable performance from the bench with two goals.

Under 13’s Blacks – Travelled to Wreckenton Nou Camp, hoping to keep their unbeaten record. Aycliffe give their all on the pitch eventually coming out 4-1 winners. The win coming from a real team performance, the goals coming from Jayden (2), Danny and little Al with substitute goalkeeper Fynley saving a Wreckenton penalty. MOTM Danny.

Under 13’s Whites – Grabbed a crucial point away to Greatham. Dominant from start to finish, Aycliffe were unlucky to hit the post early on. Greatham took the lead from a great strike into the roof of the net before Thomas equalised for Aycliffe with a chip over the keeper. Aycliffe continued to dominate, but Greatham took the lead from a corner kick. Substitute Henry then equalised as his dogged determination in the box led him to equalise. Aycliffe were delighted with 2-2 result. MOTM Daniel who was solid in defence.

Under 14’s Whites – Travelled to face Boro Blues and put in wonderful performance, leading 3-0 at half-time, Aycliffe eventually come away with an outstanding 5-1 win. In a great team performance, the goals were scored by Mason (2), Niall, Josh & Jayden. MOTM the full squad, as they were all outstanding.

Under 15’s – Hosted Saltburn at Woodham academy, in a slow first half Aycliffe eventually took the lead with Travis hitting a rasping shot in off the bar to give Aycliffe the 1-0 lead at the break. In the second half Aycliffe found their feet and dominated, creating numerous chances. The goals in the second half come from Leighton (3) and Matty. Aycliffe eventually coming away with a 5-1 win, maintaining their 100% league record after thirteen games, the win also takes Aycliffe back to the top of the league.

Under 16’s – Travelled to Felling Magpies in a tough, well contested match, it was eventually settled with a scrappy goal, Felling pinched the winner late on following a scramble in the box. Aycliffe were unlucky not to come away with a point. MOTM Ashley