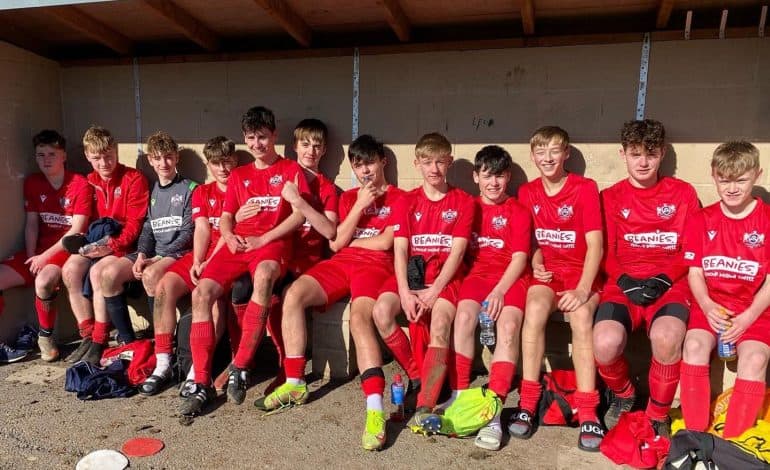 Under 10’s Whites – Secured a win against Leam Rangers. Aycliffe battled hard, challenging for every ball, and giving the opposition no time to play football. Aycliffe got the win with two well taken goals by Jack. A spirited second half performance ensured Aycliffe kept the clean sheet they deserved. MOTM was Max.

Under 10’s Blacks – Had a tough game against Waldridge. Two great goals from Charlie John were not enough to secure victory for the lads, in a game where an amazing amount of effort was shown. MOTM Charlie for a string of fine saves, great kicking, and bravery.

Under 9’s Blacks – Travelled to Tibs Yellows. Without a recognised goalkeeper Aycliffe dug deep and put in an impressive performance. In the second half Aycliffe were much improved, with Liam who was deputising in goal, pulling off a string of fine saves. Tyler Jay then rattled the cross bar with a blistering free kick and then Aycliffe got their goal when Tyler Jay cut in from the right and shot hard and low into the bottom corner. Aycliffe continued to dominate and were unlucky not to add another goal when Fin went on a great run before seeing his shot rebound off the post.

Under 10’s Whites – Played against Gateshead in their final game of the winter season. In a game which was entertaining, Aycliffe scored three great goals through Jack, James & Oliver. MOTM was Jack.

Under 10’ Juniors – Entertained a good Leven Athletic side at Woodham Academy. Aycliffe played some good football & battled all the way to the final whistle but could not match Leven. Sammy scored the goal for Aycliffe. MOTM was Jonah for a solid performance.

Under 13’s Whites – Travelled to Darlington Young Bulls and endured a frustrating game. Darlington controlled the first half, with Aycliffe unable to find any rhythm. Ethan was brought down for a penalty, which was subsequently missed. In the second half Aycliffe controlled more, however found themselves 1-0 down when Darlington scored. Thomas then equalised to make it 1-1. Aycliffe awarded a second penalty as Thomas was brought down. The Darlington keeper saved it and the game ended up 1-1. MOTM was Noah.

Under 15’s – Travelled to Stockton Town, in a game which they started slowly, the boys eventually got going with Leighton opening the scoring. Travis then grabbed a brace, to give Aycliffe a comfortable lead, Cole rounded off the scoring to make it 4-0 to Aycliffe before half time. Aycliffe dominated the second half but could not find any further goals.

Under 16’s – Faced high flying Hetton Lyons, with only twelve players available, Aycliffe depleted squad. The game was dominated from start to finish by Aycliffe, Alex opened the scoring in the first half with a well taken volley, with Aycliffe continuing to control play until half time. The second half was more of the same, with Alex pinching the ball on the halfway line, before releasing Liam whose inch perfect through ball to Archie finished well for 2-0, which is how the game ended. MOTM Alex Kerr

Under 18’s – Travelled to Kader Athletic of Division One in a cup fixture. A minute’s applause was immaculately observed before the game in memory of Darren Scott, who’s son Dec plays for the under 18’s. In a closely matched game, Aycliffe were guilty of giving Kader too much space and they capitalised lead 1-0 at half time. In the second half it was much the same, Aycliffe did not close down or get close enough, leaving Kader with the opportunity to double the lead to 2-0.