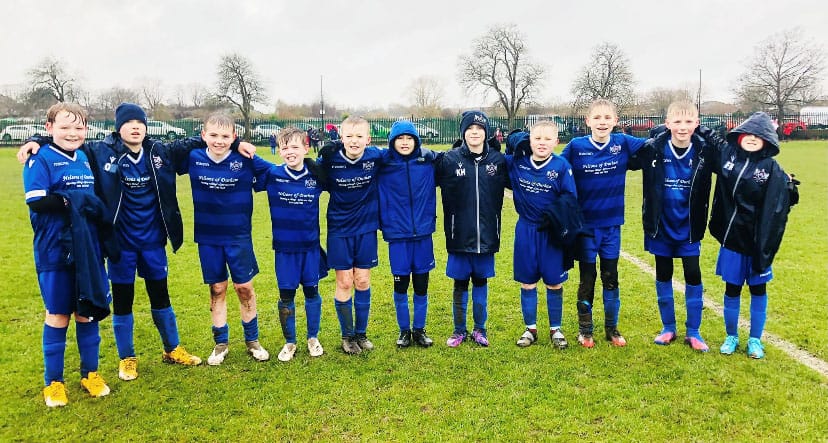 With the high winds on Saturday and the downpouring of rain on Sunday, numerous fixtures fell victim to the British weather this weekend.

Under 9’s Blacks – Travelled to Skelton for an afternoon kick off. In awful conditions Aycliffe struggled to find their rhythm and went into half time behind. In the second half Aycliffe started playing some good football with Fletcher and Tyler going close, then Luca testing the Skelton goalkeeper. Aycliffe unfortunately could not find a goal they deserved but can be immensely proud of the second half performance – MOTM Tyler Jay who had a great free kick tipped over the bar and worked hard for the team.

Under 10’s Whites – Played South Shields and from the off, both teams played entertaining, attacking football. Unfortunately, Aycliffe switched off, with a player injured, the referee played the advantage and South Shields managed to break and take the lead. Aycliffe never gave up and turned the game around with two quick goals from Jack. The last five minutes saw Aycliffe concede a deflected goal – MOTM awarded to Maxi

Under 12’s – Travelled to Hartlepool Reds, who had got the better of Aycliffe back in December. It proved to be a good day as Aycliffe turned around their recent form and come away with a 5-2 win. The rain lashed down at kick off, but that did not dampen the attitude and determination. James scored early, before a lack of concentration saw Hartlepool equalise immediately. It was the hosts who then took the lead before Alex equalised. Faye making her first start, was causing problems on the right wing. Callum then went on a wonderful run, taking on several Hartlepool players before laying off to Alex who made it 3-2. Ethan then made it 4-2 just before half time. Substitutes Oliver and Keaton come on at half time and it was Keaton who found space to score the fifth goal – MOTM awarded to the whole team for a wonderful performance.

Under 14’s – Welcomed Boro Rangers Blues to Woodham Academy and come away with three valuable points with a 1-0 victory. Brad scored the only goal of the game – MOTM awarded to Ollie.

Under 16’s – Entertained Harton & Weston at Woodham Academy, in what turned out to be a feisty affair. After trailing 3-0, Aycliffe rallied to rescue a point with a 3-3 draw. All three goals coming from Charlie – MOTM Charlie with a great hat-trick.