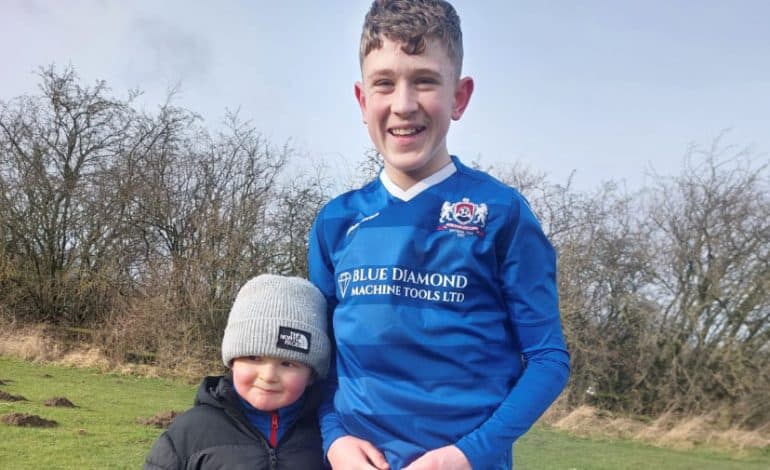 Under 9’ Blacks – Hosted Billingham in atrocious conditions. Aycliffe played good football, Fin putting in lovely deliveries from corners, but Aycliffe could not score. Finally, a lovely through ball from Max, saw Fletcher hammer the ball in off the post to give Aycliffe the lead. In the second half, Aycliffe enjoyed possession of the ball, with Jacob coming close from the right. Billingham equalised, but Aycliffe held out to stay unbeaten for a second successive game. MOTM – Findlay Ward, a commanding performance at the back and unlucky not to score.

Under 10’s Blacks – Played against Hilda Park in a midweek fixture, in terrible weather conditions both teams struggled to keep control of the ball. Aycliffe were awarded a free kick before half time which Alfie converted nicely. Playing into the wind in the second half, Aycliffe found it difficult to get out of their own half and unfortunately could not hold onto the lead. MOTM –Alfie for scoring an amazing free kick.

Under 10’s Blacks – Aycliffe started well against Spennymoor, with Oliver grabbing an early goal. Spennymoor came back fighting in the second half, despite the pressure Charlie made great saves. MOTM – Charlie for his saves and his quick reactions.

Under 10’s Whites – Played against Ryhope in gusty conditions, Aycliffe played excellent attacking football, scoring some wonderful goals. In the second half Aycliffe switched off conceding a few goals against the wind which resulted in the game ending as a draw. Goals from Jack (4) & James. MOTM – Jensen another impressive performance making wonderful saves.

Under 10’s Juniors – Hosted Darlington All Stars, Aycliffe had an impressive performance, with a hat-trick from Dom & OG. MOTM –Jensen for outstanding saves to keep a clean sheet.

Under 11’s – Hosted Saltburn, in awful conditions Aycliffe played great football to score three goals in the first half. In the second half Aycliffe controlled the game and scored a further three goals. Goals coming from Archie (2), Layton (2), Alex & Evan. MOTM – Alex

Under 12’s – Entertained Billingham Juniors at Woodham Academy. In a tough game, Aycliffe ended up losing 3-1. In the first half Aycliffe controlled the game a scored a wonderful overhead strike through Callum. In the second half Aycliffe created chances but could not convert them. This came back time haunt Aycliffe as Billingham Juniors scored three times in the last ten minutes. MOTM – Callum.

Under 13’s Blacks – Hosted a strong Fellside Yellows. In what proved to be a wonderful game to watch, Aycliffe grabbed the opener with skilful football which resulted in Danny curling a wonderful shot from outside of the box to give Aycliffe the lead. Aycliffe come away with a wonderful 1-0 victory. MOTM – Keaton who played superbly.

Under 15’s – Travelled to Guisborough, for what was their first game since early December, with the previous four games being postponed. Aycliffe picked up where they left off coming away with a 4-2 win. Travis opened the scoring midway through first half with a well worked free kick, before the hosts grabbed an equaliser to make it 1-1. Jordan was fouled in the box, with Travis stepping up to convert the penalty to give Aycliffe the lead at half time. A sloppy start to the second half allowed the home team to equalise again, before Travis completed his hat-trick with a superb direct free kick into the top corner. Noah was called into action, making a couple of vital saves, before Leighton finished off the scoring with a great run and a lovely finish to give the lads a 4-2 win and maintain the 100% record.

Under 18’s – Hosted top of the table Middleton Rangers in a feisty game. The full time scored was 2-2, with Aycliffe coming away with a well-earned point. Goals from Joshua & Milo.