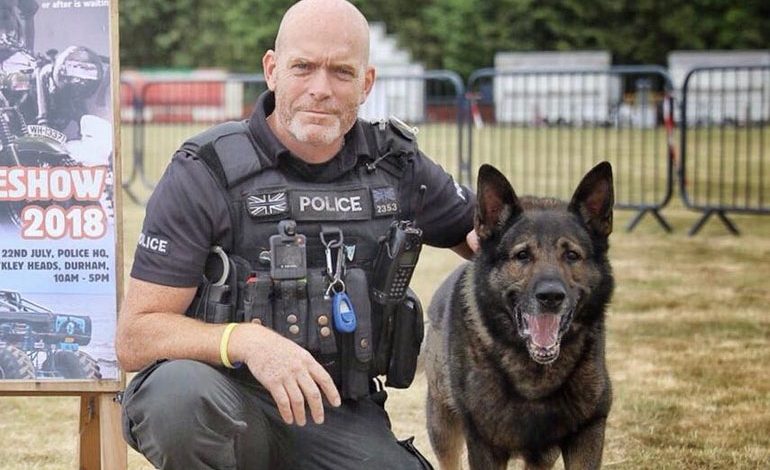 A much-loved police dog has retired from the force after catching countless criminals during his career.

German Shepherd Kaizer, a familiar face on Channel 5’s Police Interceptors, has racked up nearly 15,000 hours on the streets to keep us safe.

Kaizer, who turned eight last week, has been with Durham Constabulary since he was 16-months-old. He has been awarded a Chief Constable’s Commendation for his work.

His handler PC Ian Squire, said: “What can I say, he’s absolutely awesome. Just like my right arm.

“The bond we have is like no other. When you spend so much time together, you get to know each other very well. You can read each other in certain situations.”

PC Squire said Kaizer’s first ever nightshift is one that sticks in his mind. He said: “It was his first operational find. He caught an armed robber after a heist at the Co-op in Newton Hall. He was hidden in conifers in a nearby housing estate. The suspect might not have been found without him.

“There’s so many jobs that make you proud. It could be finding a vulnerable child or tracking down a fleeing suspect. It’s unquantifiable the effect a police dog will have at an incident. Even their presence alone can resolve a situation.”

The old hand will now make way for new recruits who are being trained up to take on the work.

Chief Constable Mike Barton said: “Ian should take great pride in all that Kaizer has achieved.

“The dedicated detective work of our four-legged crime fighter will never be forgotten. They bring a vital contribution to operational policing.

“We wish him a happy retirement.”

Kaizer will continue to live at home with PC Squire.