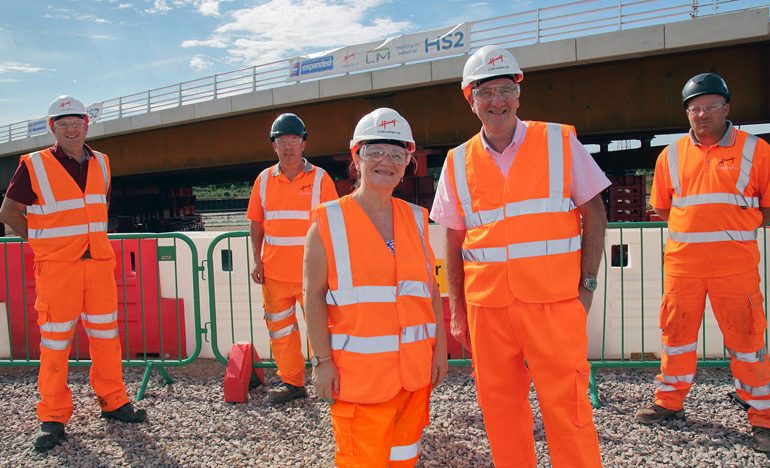 Darlington firm Cleveland Bridge has worked on the first permanent structure delivered for the HS2 project in the Midlands.

Cleveland Bridge UK welcomed the Conservative MP for Sedgefield, Paul Howell, to a site in the West Midlands to witness the installation of the structure.

The innovative new 65-metre road bridge is located across the M42 and will form part of Britain’s newest railway, which will run from Birmingham to London.

This project is another world first for Cleveland Bridge UK and continues its 150-year legacy of supporting significant infrastructure projects across the globe.

Built using a design for manufacture and assembly strategy, the bridge contains 1,130 tonnes of steel plate girders, which were supplied by Cleveland Bridge UK and fabricated at its extensive facility in County Durham.

Sixteen of the 20 metres girders were pre-assembled at Cleveland Bridge as 50 tonne pairs to minimise the number of delivery vehicles on the road.

They were then assembled in a purpose-built area using 8,500 high-strength bolts to construct the single span bridge.

Spanning the width of the M42, the works were completed in just two days, minimising disruption to the public and allowing it to open 22 hours ahead of schedule.

Located close to the new HS2 Interchange Station at Solihull, the 2,750-tonne bridge was manoeuvred into place on a self-propelled modular transporter.

Paul Howell, who joined the Cleveland Bridge project team to view the installation, said: “This is the first of two bridges at the Interchange Station that will be built using steel fabricated in County Durham and watching the bridge being manoeuvred into place was a magnificent first for me.

“The contrast between the scale and the precision of the project is truly remarkable. Completed ahead of schedule, it is a real tribute to the skill and expertise of the everyone involved.

“HS2 will increase the capacity on our national rail network and importantly for the North East it also provides opportunities for local industry now and in the future.”

Chris Droogan, managing director of Cleveland Bridge, said: “We were delighted Paul Howell MP could join us in the West Midlands to see first-hand how the structural steel projects we undertake in the North East form part of major infrastructure projects like HS2.

“The successful design, fabrication and installation of this bridge is testament to the close collaborative relationships that exist by the JV, contractor and supply chain and we are proud to have played a significant part in its delivery.

“It is the latest in a long-line of landmark bridges and steel structures produced by Cleveland Bridge for significant infrastructure projects utilising a strong blend of experienced and highly skilled workers with the latest technology and efficient working practices.”