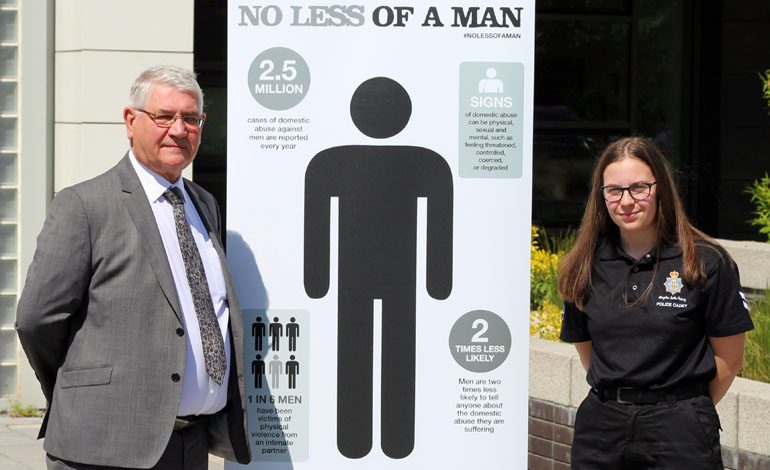 Male victims of domestic abuse are encouraged to seek support in a new campaign launched in Durham today.

The #NOLESSOFAMAN campaign is aimed at men who are victims of domestic abuse.

There are over 2.5 million cases of domestic abuse against men reported in the UK each year.

Domestic abuse can be psychological, physical, sexual financial or emotional.

A key message is that there is help and support available for male victims through Harbour, a service commissioned to provide assistance to individuals and families affected by domestic abuse.

The new campaign is spearheaded by Libby Wright, the Young Police, Crime and Victims’ Commissioner for County Durham and Darlington.

Libby was elected by the Police Cadets last year on a manifesto which included a commitment to promote the rights and interests of male victims of domestic abuse.

Libby said: “Research suggests that one in six men are victims of physical violence from an intimate partner.

“Men are also two times less likely to tell anyone about the domestic abuse they are suffering.

“I want to empower men to seek help and reassure them that help and support is available. Men should feel free to seek help.

“They shouldn’t view the situation they find themselves in as a sign of weakness; it doesn’t make them any less of a man.”

Speaking at the launch, Police, Crime and Victims’ Commissioner Ron Hogg said: “Libby is absolutely right to raise this issue. For too long, this issue has remained hidden and under reported.

“I hope this campaign will encourage men to come forward and seek support.”

Copies of the hard-hitting poster will be distributed through a variety of places including colleges, universities, GP surgeries, pubs, and more.