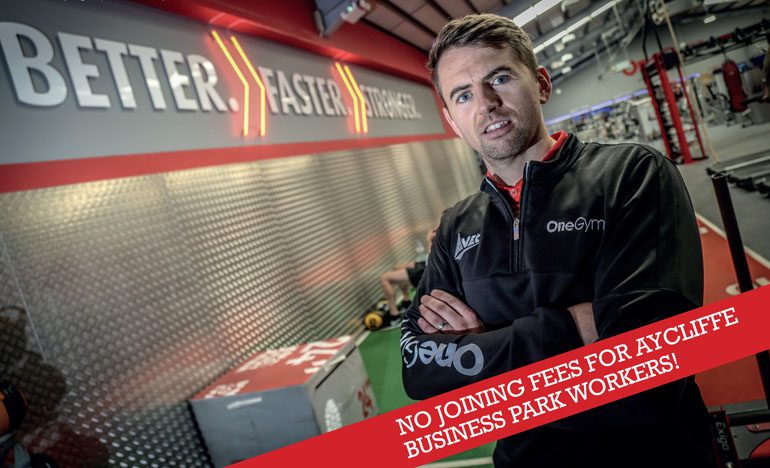 Newton Aycliffe’s most popular gym has enjoyed a hike in membership numbers less than a year after investing in new machinery.

OneGym, which has a hugely popular site along Durham Way South on Aycliffe Business Park, revealed last November it had invested £75,000 in state-of-the-art facilities at Aycliffe, creating a purpose-built second studio for spinning classes and other group sessions.

The gym also installed a ‘functional rig’ which enables members to include a range of strength exercises in their work-outs as well as holding regular ‘rig-fit’ classes which are already proving popular, while new plate-loaded machines also updated its facilities.

Now the gym – which has other sites in Bishop Auckland, Thornaby and Redcar – is benefiting from rising membership numbers as local gym-goers benefit from its new facilities.

Aycliffe site manager Sean Ebdon says it’s the firm’s commitment to investing in the latest equipment as well as staff development which is paying dividends.

“We’re constantly looking at ways of improving both our facilities and our classes,” says the 27-year-old former PE teacher, who has been manager of the Aycliffe site for three years.

“I speak to as many members as I can, to build relationships and make them feel comfortable when they come in, but also to get their feedback on facilities and classes.

“Thankfully we don’t get a lot of bad feedback, and we’ve had a lot of great feedback recently, which is great to hear.

“It’s also evident in our memberships, with numbers at all four sites – particularly Aycliffe – steadily going up.”

The gym now employs six members of staff at its Aycliffe site, and Sean added: “OneGym has invested in staff by putting us all through our level 3 PT courses, which is a big time-commitment from both the instructors as well as our employers.

“But it means we’re all fully-trained to deliver both personal training sessions as well as classes.”

OneGym’s rise in memberships has included an influx of employees from the business park using the Aycliffe facility, most notably workers from Hitachi Rail Europe, Gestamp Tallent and Premo Fabrications.

The gym’s handy location at the heart of the business park as well as its varied class timetable means there’s always something for every shift worker or office employee.

OneGym is also currently preparing for another busy period, with children now back to school and parents looking to get back in the gym on a regular basis.

Members at OneGym can use all four sites – which is ideal for commuters who live and work in the different areas – while there is currently no joining fee for all annual memberships.

• To enquire about OneGym membership and offers or to book a tour around the gym, call 01325 317005 or email [email protected] Alternatively, you can find more details at www.onegymfitness.com