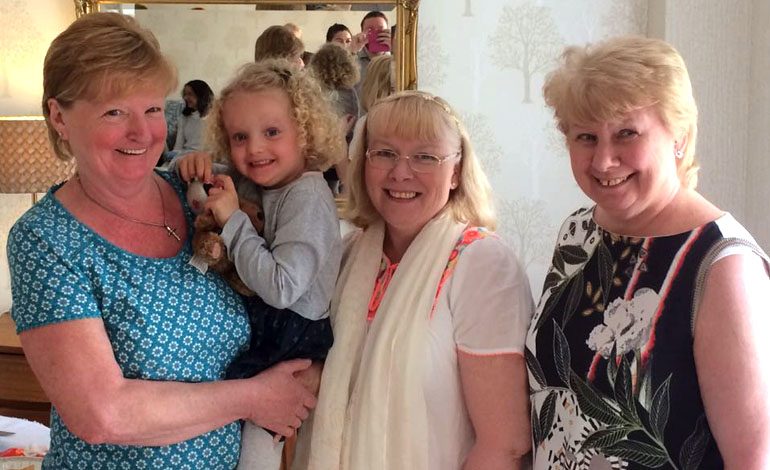 A charity fundraiser edged closer to another milestone as a coffee morning raised over £1000, with the cash being split between Bloodwise (formerly Leukaemia & Lymphoma Research) and the Neonatal Unit at Antrim Area Hospital in Northern Ireland.

Paul McGeary, 35, from Newton Aycliffe, began raising cash and awareness having been diagnosed with Acute Promyelocytic Leukaemia (APL) in November 2014.

With his condition relapsing in July last year, McGeary has continued to spearhead the #NotOneInch campaign, which has now raised almost £27k.

Last week’s coffee morning was the brainchild of McGeary’s mother Mary Warke, who enlisted the help of her friends Julie McKenley and Marie Matthews (pictured, along with Niamh McGeary, aged 3), as well as the support of friends, family and fellow Newtonians.

A cheque for £500 from the coffee morning has made its way to the Antrim Area Hospital via two close friends of McGeary, who relied on the care and expertise of the Neonatal Unit prior to Christmas when their son was born almost eight weeks premature.

With the total raised now standing at £26,837, McGeary has appealed to fundraisers to come together to help propel the sum over the £30k mark before the end of 2017.

“The amount raised is a phenomenal effort, from everybody who has both raised and donated to the cause over the past 30 months,” said McGeary.

“People have mentioned doing other bits and pieces over the summer which should be well received, but we will not allow this campaign to fizzle out, so we are always keen to hear from others who wish to support.

“Now that I am free from treatment for a second time, I will also be looking to do something myself, rather than just be perceived as a face for the #NotOneInch project. My thinking cap is on, and I’d be keen to join in with anything that someone may need moral support with.

“I’d love to hear from anyone who wishes to walk, climb, cycle, dress up, abstain from vices… whatever it may be, because we can make enough noise about it to ensure it is well supported in the name of charity.

Anyone who wishes to speak to Paul with any ideas, is encouraged to contact him on 07703732342 or email at [email protected]