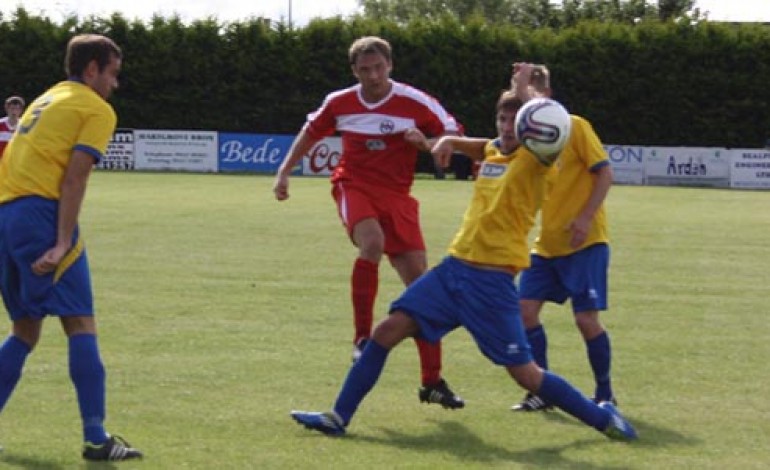 Newton Aycliffe’s league season got off to the worst possible start with an opening day defeat at Marske United.

Former Boro winger Nathan Porritt, who had an unsuccessful trial with Premier League side West Ham United earlier this summer, scored in the 75th minute to give the Seasiders victory.

After getting the better of their Teesside opponents in glorious sunshine, Aycliffe struggled after the break and never looked like scoring.

Marske didn’t, either, but Porritt produced a brief flash of brilliance with 15 minutes to go to win all three points.

The lazy winger displaced Tom Hinchley on half-way before turning Paul Broom inside the box to rifle past Scott Pocklington with his right foot.

It heaped further misery on Aycliffe, who were earlier this week dumped out of the FA Cup with a frustrating defeat at Holker Old Boys in Barrow.

Allan Oliver’s beleaguered troops, who aren’t playing their usual passing game which won such acclaim last season, must improve for the visit of Hebburn Town at Moore Lane Park on Wednesday night, if they’re to ensure their season doesn’t finish before it started.

Marske got off to a bright start as Porritt crashed a fourth-minute header against Pocklington’s crossbar after good work by David Onions, before Karl Charlton forced a fine save from the Aycliffe ‘keeper three minutes later, tipping over his cheeky 25-yard chip.

It took Aycliffe a while to get going, but they had a glorious chance to open the scoring in the 20th minute when Paul Robinson’s clever free-kick found Hinchley just 10 yards out – his tame shot was saved by Scott Allison in Marske’s goal.

The visitors slowly started to get on top. Tarling won a free-kick just after the half-hour mark, and Josh Knox’s quick ball found Gav Barton, but his early shot was easily saved.

Tarling saw two good chances go begging in the 36th minute after good work by Fred Woodhouse, then Aycliffe went close twice with five minutes of the first half left. First Barton headed off the post, then Broom’s close-range shot was deflected wide.

But Aycliffe couldn’t convert their late dominance into goals and had to go into half-time goalless.

Centre-back John Close was forced off with a broken nose in the 58th minute, and the change of shape seemed to upset the visitors.

After an entertaining first half, very few chances came by, until Porritt’s 75th-minute strike.

Aycliffe pressured for an equaliser late on – Hinchley found himself unmarked when he met Stuart Owen’s 83rd-minute corner, but headed wide from close range.

Then when Tarling won a free-kick 25 yards out in the 87th minute, Owen’s set-piece was blocked before Woodhouse’s snatched rebound shot was easily saved.

But it was too little, too late for Oliver’s men as Marske held out for the three points on a disappointing afternoon for Aycliffe.