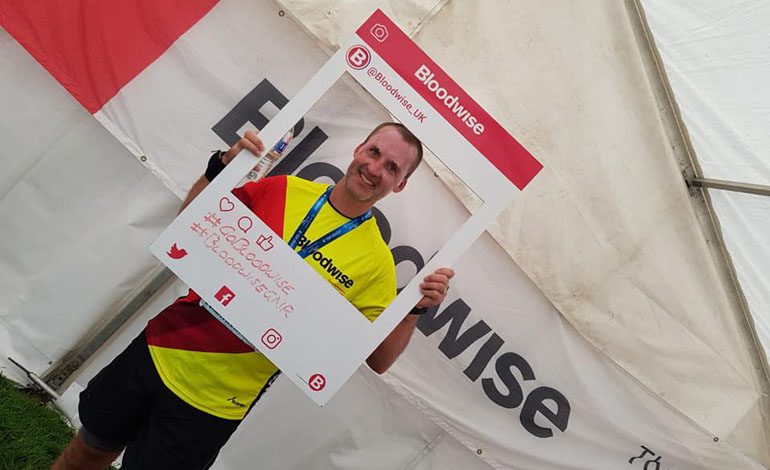 Newtonian Dan Lewis completed an extraordinary trilogy for charity last week, as his sub-four hour time in the York marathon brought down the curtain on an epic series of challenges.

Raising money in the name of his good friend Paul McGeary – a two-time cancer survivor – 40-year-old Dan added over £1,200 to a bulging pot for Bloodwise which now stands at almost £36,000 since fundraising began.

The fabulous feat which culminated in York on Sunday also included finishing the Great North Run last month, as well as a gruelling challenge in completing the Coast-2-Coast cycle race in the blazing July heat wave.

Upon completion of his treble, Dan said: “I’ve never been so proud. I’ve always wanted to run a marathon and now I can say I’ve achieved it, and in a time I could only have dreamt of.

“The Coast-2-Coast and the Great North were testing, but nothing compared to Sunday. They gave me the motivation and training to go on for this, and I’m so pleased with the amount and awareness raised.

Since his friend Paul, 36, was first struck with APML in 2014, Dan and other friends have completed various challenges and fundraisers under the banner #NotOneInch, a motivational hashtag and mantra which Paul has used during his four-year fight.

Paul said: “Every person who steps forward simply wows me. The bar is being raised each time and Dan has truly inspired me with his challenges, his training and dedication and his application.

“I thank him, and everyone along the way for their support, encouragement and belief in what we are trying to do, and we will not stop here either. We simply have to combat blood cancer.

“The money raised and the awareness we are spreading along the way is invaluable. Having now officially broken through the £35k mark, we set our sights on the next milestone. £40k.”

Paul’s mother Mary Warke is currently holding a Christmas wine hamper prize draw, while Paul himself is open to any ideas people may have to help reach the next fundraising checkpoint.