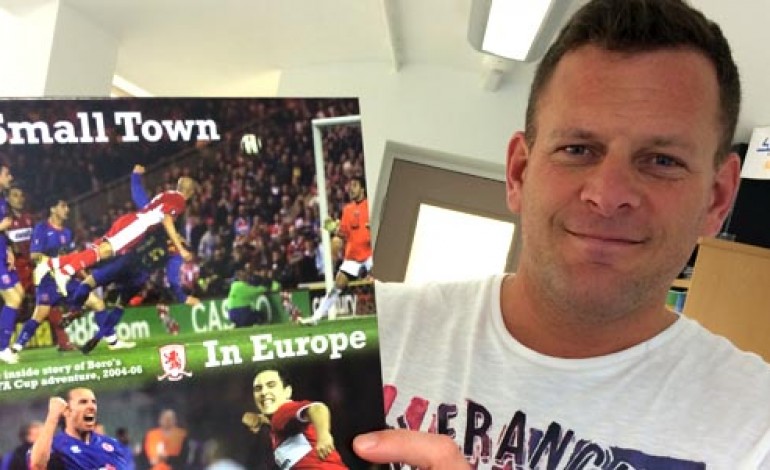 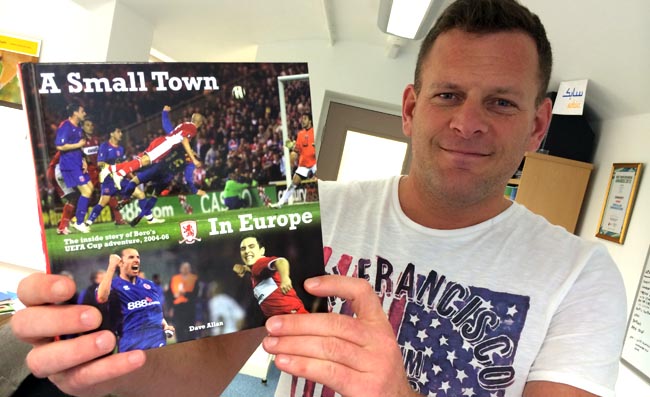 Two former members of Middlesbrough Football Club’s PR team have reunited for a second time to produce a book for Boro about their European hey-day.

A Small Town in Europe has been written by the football club’s former head of media Dave Allan, celebrating the beginning of the club’s UEFA Cup adventure 10 years ago.

Design of the book has again been done Dave’s ex-Boro colleague Martin Walker (pictured above), director of Mantis Media and editor of Aycliffe Today.

Launched last Saturday (9th August), the 200-page hardback is the second MFC-themed collaboration between the pair following the 2013 success of One Giant Leap, the inside story of how the club won the 2004 Carling Cup, the only major silverware won by a North-East football club over the last four decades.

Dave said: “Following the success of One Giant Leap, we were delighted to receive an order from MFC to produce a second book – this time celebrating the two amazing years of European football Middlesbrough enjoyed between 2004 and 2006.

“We’re experts in producing books, while Mantis have our full confidence to create first class designs, so we immediately joined forces with them once again.”

DNA, based at Boho in Middlesbrough, provide a public relations, media and communications service to businesses across Teesside and was a winner in the Tees Valley Best New Business awards earlier this year.

Martin set up Mantis Media in 2009, and is the only specialist provider of PR services on Aycliffe Business Park, the North-East’s second largest business park.

“Looking back on those memorable wins over Lazio and Roma – as well as the dramatic knockout wins against Basel and Steaua Bucharest – has brought it all back,” said Martin.

“They were truly memorable moments and I’m privileged that I was asked to work on this project to encapsulate it all in one book 10 years on.

“It was an achievement which is yet to be matched in the North-East, so to be part of bringing that back to life is wonderful.”

Featuring 300 images and interviews with former Middlesbrough and England manager steve McClaren and major stars such as Mark Viduka, Juninho, Mark Schwarzer and George Boateng, the book is available exclusively from the MFC store and online from MFC.

DNA have also utilised the skills of Mantis Media to design a calendar celebrating the 20th anniversary of Middlesbrough Football Club’s move to the Riverside Stadium in 1995.