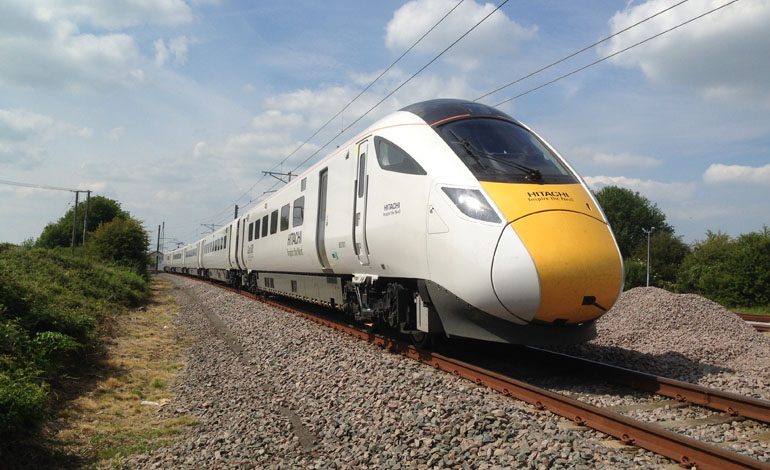 Hitachi’s new intercity trains, due to enter passenger service this autumn, have passed tests to run their digital technology required by the Department for Transport.

The UK-built fleet, known as the Class 800s, is among the first in the country to successfully test an advanced level of digital signalling.

The technology is part of the Digital Railway – an industry programme for digital modernisation to increase rail capacity, ease overcrowding and improve performance on Britain’s rail network.

A test train fitted with the digital technology carried out tests at Network Rail’s state-of-the-art signalling facility ENIF* in Hitchin.

Britain’s railway carries twice as many passengers as it did just two decades ago with demand set to rise dramatically in the years ahead.

Digital Railway is the industry’s improved plan to tackle Britain’s capacity crunch by accelerating the digital modernisation of the railway, offering capacity and performance improvements sooner, at lower cost and with less disruption than conventional enhancements.

The digital system tested by Hitachi, known as European Train Control System (ETCS), will inform drivers about how to change their speed as well as about potential hazards ahead.

ETCS is a far cry from the long standing signalling system currently used on the country’s rail network, which operates like traffic lights.

Hitachi is building and maintaining 122 new trains as part of the Department for Transport’s £5.7bn Intercity Express Programme (IEP) at its £82m rail manufacturing facility on Aycliffe Business Park.

As part of IEP, new trains will begin running passenger services on the Great Western main line from autumn 2017 and the East Coast main line from 2018.

Following additional orders, Hitachi’s intercity trains will also run on the Transpennine Express route from 2019, as well as connecting London to Devon and Cornwall from 2018.

“Passing digital signalling tests is a major breakthrough for the industry and another step towards easing the problem of overcrowding.

“The trains will significantly boost capacity on some of the busiest routes in the country through more seats, greater use of on-board space and pioneering digital technology.”