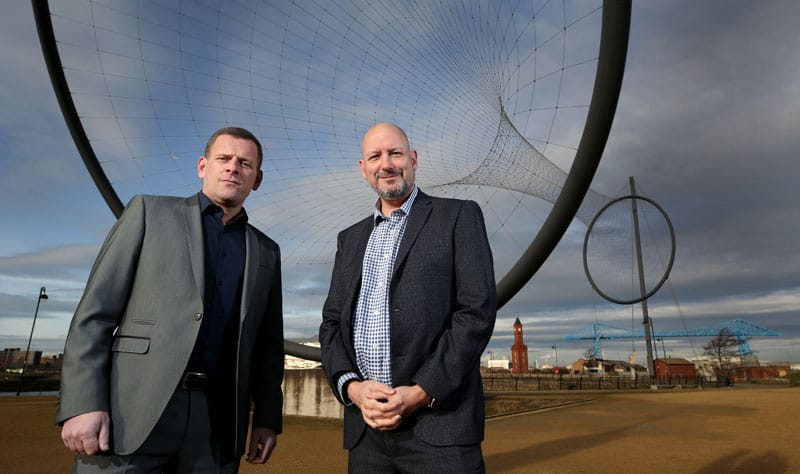 Figureheads from some of the area’s biggest employers have signed a joint letter to Rishi Sunak, urging him to bring the jobs to the Tees region.

The chancellor has proposed moving 800 officials to a hub – dubbed Treasury North – with Teesside Airport near Darlington and Middlesbrough town centre being potential locations, alongside Newcastle and Leeds.

And the independent letter, organised by Aycliffe Today’s sister publication Tees Business and signed by 115 business leaders – calls on the government not to miss this “golden opportunity to give our region a much-needed and long overdue economic boost”.

The call has been backed by five major Aycliffe firms, including 3M (Aycliffe), Gestamp Tallent, Stiller Warehousing and Distribution, Ebac and Finley Structures.

As well as, of course, Aycliffe-based Mantis Media, which is owned by Aycliffe Today editor Martin Walker, pictured (above, left) with his Tees Business partner Dave Allan.

“The Tees region has a range of perfect locations to benefit from the Treasury North,” it says.

“We have the first-class skills and a wide range of outstanding businesses to service a government department ready and waiting.

“Just as importantly, we have an economy that needs help from the levelling up process and would benefit hugely from the once-in-a-generation investment and positive spotlight from such a move.

“There have been suggestions within the media that Newcastle/Tyneside is now the frontrunner to get these government jobs.”

Others who signed the non-political letter include representatives of Tees Valley Business Club and the Institute of Directors (Tees Valley) plus Tees Tech Awards Ambassador Dom Lusardi, Tees Businesswoman of the Year Jane Armitage and her predecessor Sharon Lane.

Signatories include several honoured by the Queen including Bill Scott OBE, Prof Jane Turner OBE, Bob Cuffe MBE and Jane Reynolds MBE – and they represent businesses large and small across a myriad of sectors.

The letter insists that by transferring Treasury jobs – and the related investment – from one thriving city (London) to another thriving city (Newcastle, Leeds or Manchester etc) would “not be levelling up at all”.

It adds: “Teesside and the Tees Valley has been overlooked for the north’s cities too many times before, so we call on you to give us this chance, this boost and this investment.

“It would be a hugely positive statement by the government and proactive display of its levelling up promise to base the Treasury North in the Tees region.

“As a business community, we wholeheartedly support this call to bring the government jobs here and would welcome a visit or talks from you or your officials to discuss the strength of feeling on this key issue.”

Karl Pemberton, president of the Institute of Directors (Tees Valley) and managing director of Active Financial Planners, said: “The Tees Valley has been dealt many blows in modern times, far more than most. However, I now believe that we should be at the front of queue when it comes to the government’s levelling up agenda.

“We have the locations and the workforce available, and we have the resilience to make the opportunity a huge success.

“Opportunities of this kind do not happen often enough. It would therefore be a huge privilege to be part of the Teesside community that is ploughing a new, exciting and prosperous future.”

Jane Armitage, managing partner of Jacksons Law Firm and Tees Businesswoman of the Year 2020-21, said: “We are supporting the call for the chancellor to bring Treasury jobs to the Tees Valley because levelling up requires that any move is to an area of the north that has not previously seen the benefit of a government department in its midst.

“The Tees Valley has an excellent workforce ready and willing to work in Treasury roles and excellent training providers to train the employees of the future.

“These people need to the opportunities that this move would create and they need to know the government shares our belief that this area has so much to offer.”

Aycliffe Today editor Martin Walker, who’s also a director of Tees Business publishers – Middlesbrough-based Resolution Media and Publishing – added: “People in the Tees region are passionate about their area, and we hope Mr Sunak will listen to this powerful message of support from what is a broad cross-section of businesses, as well as some of the area’s largest employers representing tens of thousands of people.

“Our letter shows the unequivocal and cross-party support that a Teesside Treasury campus has for our region, from influential individuals and organisations who already make Teesside a great place to work.”

The letter and full list of signatories can be seen here: