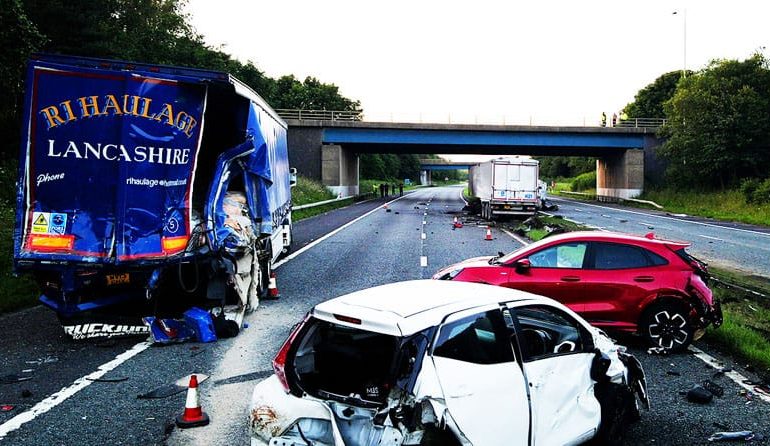 A lorry driver who caused a collision which killed three people has spoken out from his prison cell on the dangers of using a mobile phone at the wheel as part of a hard-hitting film by Durham Constabulary.

Ion Onut was using the internet on his phone when he crashed his Scania truck into slow moving traffic on the northbound carriageway of the A1(M) last July, killing three people and injuring several others.

Forensic examinations of his mobile phone found that Onut, of Galashiels, in Scotland, had been repeatedly using the device’s web browser throughout his journey from Cambridgeshire right up until the time of the collision, which happened at 6.18pm at Bowburn on July 15.

Now, in a bid to prevent further tragedies, the 42-year-old has spoken out from his prison cell as part of a film highlighting the dangers of using a mobile phone at the wheel.

“I have to live with this for the rest of my life,” said Onut. “I never had a chance to apologise, to say sorry for what I had done to those who lost their loved ones, the people who were injured, the ones who suffer from flashbacks.

“By being on my phone for a long period of time and then realising the traffic ahead of me had stopped, I had absolutely zero chance to act and pull my brakes on.

“It shows you how quickly it happens, and how quickly your life changes from being normal to now being in prison, having a sentence of eight years. I have never been involved in anything with the police before, and then for using your mobile phone at the wheel you are here, away from the real world and friends and family.

“When I saw the videos of what happened it was unimaginable and hard to see. It was so disturbing knowing that was me in that lorry ploughing through the cars.”

Onut’s vehicle was travelling at 58mph when it struck another HGV and four cars before coming to rest at the central reservation and bursting into flames.

He was rescued from his burning cab by members of the public and later arrested by police at the scene.

He was charged with three counts of causing death by dangerous driving, which he admitted, and was jailed for eight years and ten months. He was also disqualified from driving for more than 14 years.

Detective Constable Natalie Horner, from Durham Constabulary’s Collision Investigation Unit, said: “Ion’s actions from that day caused far-reaching and heart-breaking consequences for all of those involved – the families and friends of those who tragically lost their lives, the people who witnessed the collision, and the emergency services who attended the horrific scene that day.

“Ion himself also has to live with the horror of knowing that two families have been ripped apart and will never be the same again as a result of his actions.

“We hope this film highlights just how devastating using a mobile phone or other device at the wheel of a vehicle can be – in one split second, your life and other innocent people’s lives might never be the same again.

“Please, put the phone down while driving.”