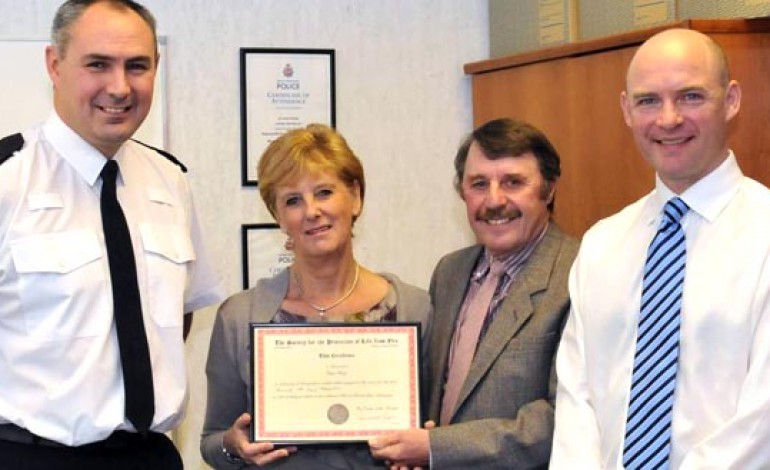 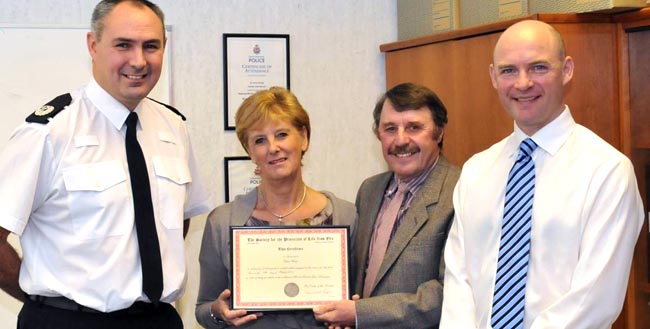 A County Durham postmaster has been awarded a life-saving honour after his heroic actions at a ‘fireball’ crash on the A68 near Newton Aycliffe.

Colin Wales was presented with a framed certificate from the Society for the Protection of Life from Fire for his efforts on 12th October 2011, on the northbound carriageway of the A68 at Burtree Gate near Aycliffe.

Two vehicles had collided head-on, a Renault Clio which was already well ablaze and a Citroen C3, driven by a 60-year-old man from Bishop Auckland. This car was in the process of bursting into flames when help arrived.

Mr Wales, who had been directly behind the collision when it happened, made the initial 999 call. While the emergency services were en route he got out of his own vehicle and managed to pull the Citroen driver clear.

He then carried him to safety, assisted by another motorist, 46-year-old Christopher White, a lorry driver from Gwent in Wales.

The Renault driver, a 32-year-old from Shildon was found to have a broken pelvis and sternum, while the driver of the Citroen suffered two broken ankles, a broken arm and spinal injuries. He remained under treatment in hospital for several weeks while his injuries healed.

Mr Wales, who was heading home from his village post office in Trimdon Grange, had just left the motorway roundabout when he saw the Renault career at speed across the central reservation and collide with the other vehicle.

He said: “The driver who had crossed the reservation was sitting with his feet on the road in the passenger seat, obviously shocked. I asked him if he was injured in any way and he replied he was all right and I should check the other driver.

“I opened the passenger door of the other car and found the driver had been knocked into the passenger seat by the impact. Unfortunately his feet were still trapped under the pedals and were clearly broken, leaving him unable to move.

“He was naturally shocked and in a great deal of pain. I reached over and managed to free his legs and at this time I could also hear people shouting that the vehicles were on fire and could explode. I looked up to see the flames in the engine compartment of the other car.

“I grabbed the gentleman by the arms and lifted him out the car and carried him several yards as he obviously could not walk. A lorry driver (Mr White) responded to my calls for help and we both carried him to a safe distance where the police took over.

“Some have said it was a brave thing to do but it was simply a reaction to a situation where someone needed help. On reflection, I could not live the rest of my life knowing that I could have helped someone and did nothing. Besides, two seconds later it would have been me and I hope someone would have done the same on my behalf.”

PC Ruth Barrett, one of the first police officers on the scene said: “Because of the quick and ferocious nature of the blaze, it was very doubtful that either driver could have got out in time had it not been for the actions of Mr Wales and the other people who stopped to help.”

In February this year the Renault driver appeared before magistrates in Darlington and  pleaded guilty to driving without due care and attention. He was fined, ordered to pay costs and had six penalty points imposed on his licence.