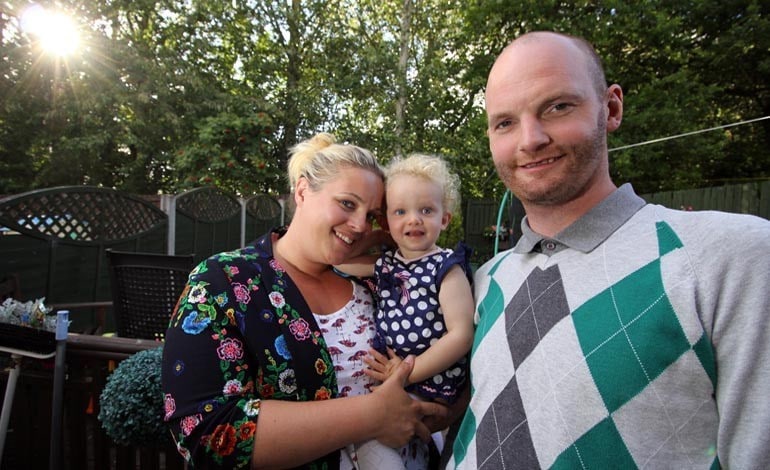 A Newtonian spearheading a charity fundraising campaign after being diagnosed with Leukaemia has surpassed his target of raising £10k for Leukaemia & Lymphoma Research.

Paul McGeary – pictured above with wife Becky and their young daughter Niamh this week – was dealt the shattering news in November and immediately set about raising an initial £2k, but asking friends and family to donate in lieu of sending Christmas cards.

Within days the target was reached and by the time Paul returned home to recover in January, the figure had doubled, prompting the school teacher to increase his target to a huge £10k by the end of the year.

Friends and family have rallied round in recent months, and amongst others, events such as a 60’s disco, a coffee morning, a reunion football match, the Tough Mudder Assault course and the Coast-2-Coast cycle challenge have all contributed.

“To think I challenged people to help me raise £2k initially and today we stand more than six times that amount is truly humbling.

“I may be the face behind the drive, but to all those who have donated directly, or organised and completed challenges of their own, I am absolutely indebted to.

“There’s been the Race for Life, triathlons, bucket collections, private donations and a cheque from the Chairman of the Northern League – who himself is undertaking a charitable push of his own. The response has been truly remarkable.”

A grand black-tie ball has been organised for the autumn to bring the curtain down on the campaign, and it has already sold out.

A group of ladies named the Heathers Ladies have meticulously planned the showpiece event at the Ramside Hall, and have appealed to people far and wide to assist in helping them achieve their target of helping Paul cross the £15k-mark.

Anyone who can provide or donate raffle or auction prizes for the evening is urged to contact Paul on 07703 732342 or Melanie on 07983 794595 or get in touch with the Heathers via their Facebook page.