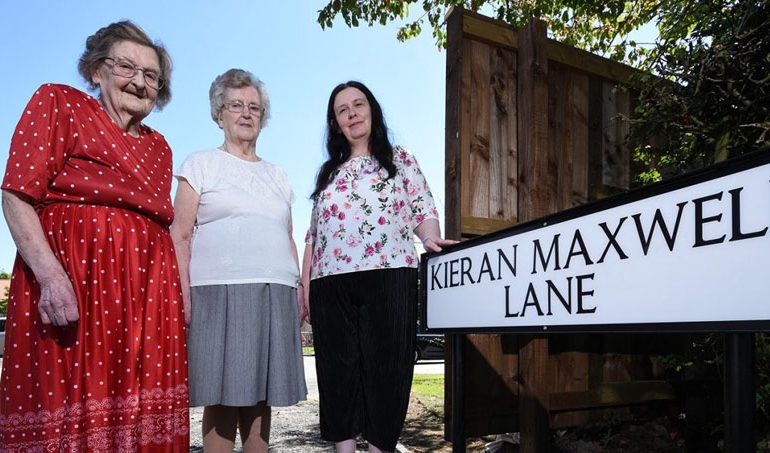 A street has been named in tribute to the efforts of a courageous local boy who died from cancer.

Kieran Maxwell died at the age of 18 following a seven-year battle against the rare illness, Ewings Sarcoma.

A keen athlete and accomplished runner, Kieran carried the Olympic torch and completed a series of sporting challenges whilst battling the bone cancer which ultimately took his life in June 2017.

Darlington Council and Homes by Esh worked together to name one of the streets at Heighington Meadows, Kieran Maxwell Lane, to ensure his legacy lives on in his home village of Heighington.

Kieran’s mum Nicola said: “In the two years since Kieran’s passing, we have worked hard to ensure the fundraising he started when he was alive has not diminished.

“Kieran had to live life so quickly and achieved so much but his final wish was to raise enough through the Kieran Maxwell Legacy fund to ensure that what happened to him didn’t happen to any other child.

“The Kieran Maxwell Legacy runs a number of charitable events throughout the year to raise funds in his name and we will continue to honour his wishes by improving awareness and raising funds to fight cancer.

“Kieran would be happy to see his efforts remembered today and it gives me great pride to think he is now a part of the history of Heighington, for the new as well as older residents of the village.”

The new street sign was unveiled to Nicola Maxwell in a private viewing by deputy managing director of Homes by Esh, Colin Willetts.

The street will now officially be known as Kieran Maxwell Lane within the new development at Heighington Meadows.

Colin Willetts, deputy managing director of Homes by Esh, added: “When looking at creating street names in a new development, the local council generally make a range of suggestions following consultations with residents.

“One of the requests that came to Darlington Borough Council for Heighington Meadows was to name it after Kieran following his long and public battle with cancer and we were more than happy to accommodate this.

“With Kieran’s family still living in Heighington, it seemed a small but long-lasting tribute to a boy whose athletic abilities and dedication to fundraising was an inspiration to so many.

“We can only hope that with the Maxwell name now even more an intrinsic part of the fabric of the village of Heighington, his efforts will continue to live on through his charitable fund and inspire a new generation facing challenges in their life.”