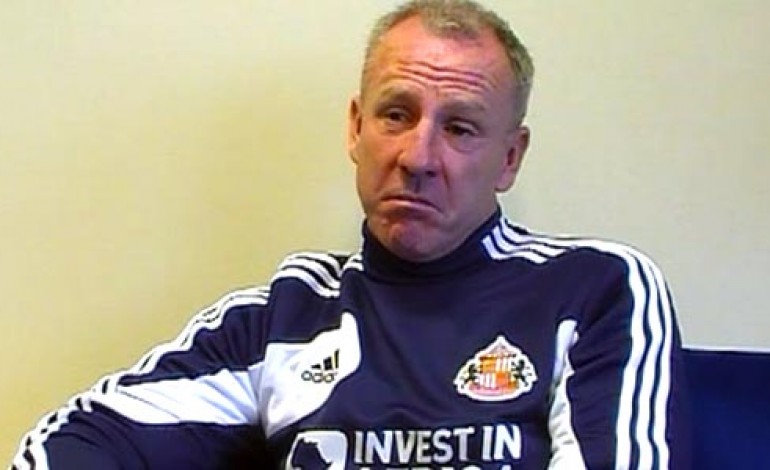 Kevin Ball will bring a Sunderland side to Newton Aycliffe this Friday night. Aycliffe Today Sports Editor Glen Robertson takes a look at the SAFC legend’s career in this special feature…

Kevin Ball, one of Sunderland’s most legendary of players, will be gracing the dugouts of Moore Lane Park this Friday.

The former Black Cats captain will be in charge of the Wearsiders when they visit the town to face Northern League outfit Newton Aycliffe in a pre-season fixture (7.30pm).

And the Sunderland legend is sure to be popular with the hoards of visiting Mackems on Friday night, with whom he is a firm favourite.

Born in Hastings in November 1964, Ball started his career at Coventry City. However, the player who would go on to be affectionately known as “the Hatchet” to Sunderland fans, failed to make a breakthrough at the Sky Blues and was released.

Luckily, his youth team coach had understood the potential in the player and recommended him to Portsmouth, who signed Ball in 1982. Ball enjoyed eight years at Fratton Park, making 128 appearances for the south coast club.

In July 1990 he was signed by then Sunderland manager Denis Smith for £350,000. The club had just been promoted to the first division (in the days before the Premier League) after Swindon, who had beaten Sunderland in the play-off final, had their promotion revoked due to financial irregularities.

Ball was an instant hit with the Roker Park faithful, who warmed to his all-action, hard-man style. But he was unable to inspire Sunderland from escaping relegation, and the club returned to the second tier of English football.

Despite being a second tier side, the club surprised everyone by reaching the FA Cup final the following season. Sunderland were hoping Ball and the likes of Gary Bennett, Paul Bracewell and Brian Atkinson could repeat the heroics of the Black Cats’ successful 1973 cup finalists.

But faced with the might of Liverpool and stars such as Ian Rush, Michael Thomas and Steve McManaman, Sunderland were defeated 2-0.

In the summer of 92, Bracewell left the club and the captain’s armband was handed to Ball. He did not relinquish the role until he left the club in 1999.

Under Ball’s captaincy, Sunderland eventually returned to the top flight of English football in 1996 – and into the Premier League for the first time – after the club stormed to the Division One title.

Ball was superb for the club, being named player of the year for his whole-hearted performances, and scoring three goals during the league campaign. But Sunderland were again relegated, finishing one point behind Ball’s former club Coventry, and returned to the first division.

In 1997, Ball became the first Sunderland captain to lead the club out at their new ground, the Stadium of Light, after the club left Roker Park, their home of 99 years.

Sunderland came agonisingly close to making an instant return to the Premier League, as they reached the play-off final. But, in one of the greatest ever games ever to be staged at Wembley, the Black Cats drew 4-4 with Charlton, and were beaten on penalties.

Ball took the third penalty, confidently firing past Sasa Ilic in the Charlton goal. The first 13 spot-kicks were dispatched before Michael Gray’s poorly-hit effort was saved by the Charlton keeper, to put the Addicks into the Premier League for the first time.

It’s safe to say Sunderland recovered pretty well the following year, though. They were promoted as champions after amassing a then-record of 105 points.

Ball surprised many by scoring two vital goals in the space of three days during the season. On a Sunday in October, Sunderland had fought back from two goals down to be drawing 2-2 away at West Bromwich Albion, before Ball popped up with an 86th-minute winner. The following Wednesday he netted the equaliser as Sunderland earned a hard-fought point away at Huddersfield.

They were the last league goals Ball scored in a Sunderland shirt. He only netted once more – in a 3-2 League Cup defeat to Wimbledon in 1999 – before he was sold to Fulham for £200,000 in the December

Ball spent six months at Fulham before joining Burnley, where he racked up 92 appearances before calling an end to his playing career.

Ball went down as one of Sunderland’s greats, making the supporters’ all-time XI alongside the likes of Jimmy Montgomery, Brian Clough and Kevin Phillips. Utter his name to a Sunderland fan who saw him play, and you’d be hard-pressed to hear a negative word said against him.

Ball returned to Sunderland in March 2006 as caretaker manager after Mick McCarthy was given the sack. Ball won one of his 10 games in charge – a 2-1 victory over Fulham – but couldn’t help Sunderland end the campaign as the then worst side in Premier League history.

Sunderland were relegated, but Ball ensured it was with pride as they went down after a 0-0 draw at Old Trafford against Manchester United.

Since then he has been in charge of the club’s academy and managing the under 18s side, before being appointed as club’s senior development coach this summer. It is his job to recommend reserve team players to Martin O’Neill when they are ready for promotion to the first team.

The players who will be playing for him on Friday in Newton Aycliffe will have to ensure they grasp their opportunity.