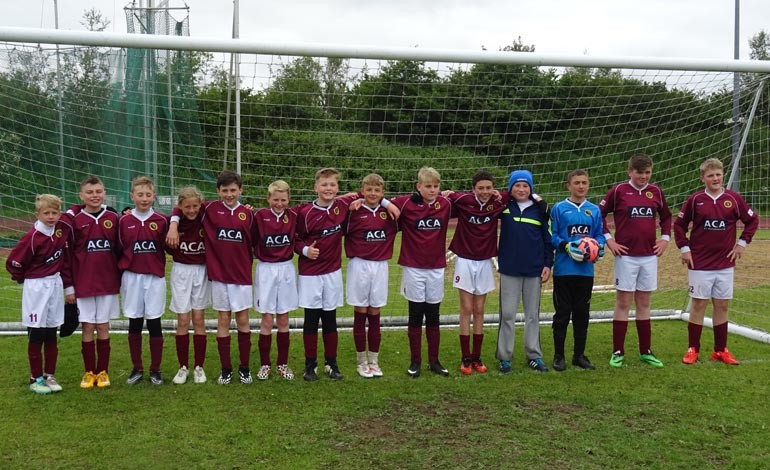 A number of Newton Aycliffe Junior FC’s teams were in tournament action at the weekend.

The Under 7’s played their first tournament on Sunday and all the whole squad were fantastic. They finished their group in third place and were only one point away from a place in the final.

To get involved with the under 7’s who train every Monday 6-7pm at Sunnydale simply come along on the night or contact Brett Lambert on 07903 718088.

The Under 8’s travelled to Hemlington for a tournament on Sunday. There were five teams involved in the tournament Hemlington, Stokesley, Coulby Newham, Crook and Aycliffe. In the group stages Aycliffe started brightly by drawing the first game 0-0, winning the second 4-0 (including a hat trick by Niall Armstrong), then Aycliffe struggled in the last two games losing both, luckily Aycliffe’s record was good enough to qualifiy for the semi-finals. Here they faced Crook who won the group game between these teams 3-0. With some motivation from the coaches it was an improved Aycliffe performance and they won 2-1. Goals came from Harvey, through a fine individual effort, and then a free kick from Connor which sealed the win. On to the final and Aycliffe faced Coulby Newhan who had also won the same encounter in the group stages. It was Coulby Newham who took the lead initially albeit against the run of play. When up against it the Aycliffe team played their best football of the day and first Harvey equalised before another Connor free kick sealed the 2-1 win for Aycliffe.

Huge congratulations to the winning Aycliffe team which included Lucas, Connor, Aidan, Harvey, Rhys, Niall, Jack and Jayden. Big thank you to coaches Jack, Abi and Damian who also lead training 5-6pm on Fridays, to get involved contact Abi on 07854 716874.?

The Under 10 TJFA squad made the short trip to Ferryhill for a Football Festival. In their group of 5 teams Aycliffe came up against some teams better known to them than others. First up were a new team to them, Nunthorpe, from the TJFA North Riding league. Three goals shared between Charlie, Jake and Zack had no reply from the opposition leading to a 3-0 win. Barnard Castle faced Aycliffe next, they are new side so an unknown quantity. The winning from though continued as goals from Charlie and Lucas gave Aycliffe a 2-0 win. Third opponents were Swallwell from the Russell Foster league and an entertaining game saw the lead exchanged several times and after Charlie put Aycliffe ahead it took two identical Zack equalisers to end the game 3-3.

The final group game required Aycliffe to win or draw to progress to the semi-final. They faced Marton Whites with whom they have shared some close encounters over summer tournaments. A great start saw Charlie put Aycliffe ahead in the first couple of minutes, Zack added the second before Charlie put Aycliffe 3-0 up. Marton got one back but Aycliffe finished the group stage as winners, progressing to a semi-final against Willington. Another early goal in the semi-final seemed to have Aycliffe on course for the win but Willington showed great desire to come from behind and win the game 3-2 in what was a spirited and high quality display from them.

Good effort from the whole squad which included Thomas, Aaron, Chloe, Sam, Jake, Charlie, Zack and Lucas. The 13 goals scored came from Charlie (7), Zack (4) with Jake and Lucas getting one each. A hugely enjoyable day’s football which was fantastically well run by our hosts at Ferryhill ended with the Aycliffe team just short of the final which saw Marton defeat Willington on penalties.

If you want to get involved with the Under 10 squad, who also field a team in the TJFA league, then training re-starts at Sunnydale on Thursday’s 5.45 -7pm from the 23rd July. The first six weeks back are to be led by the FA Skills coaching team.

The Under 14’s (pictured above) were in action playing a pre-season friendly. They were 3-0 up at half time and were playing some fantastic football. A couple of changes were made at half time to try new things and they then ran out 5-4 winners. Lots of things were learnt from the game and this eaves lots to work to do in in training. Overall though loads of positives and a win! Special mention to Andrew Burrows, who on his debut scored 2 great goals. Lewis Hynes scored 2 with classy finishes and Alex Lewis capped a great second half with a brilliant goal. A great start to pre-season and looking good for the next game

To join our great Under 14 squad, who are training on Tuesday’s 6.30-7.30pm contact Adam Cayless on 07825 845962. All sessions are at Sunnydale Leisure Centre and as always all new players are very welcome.