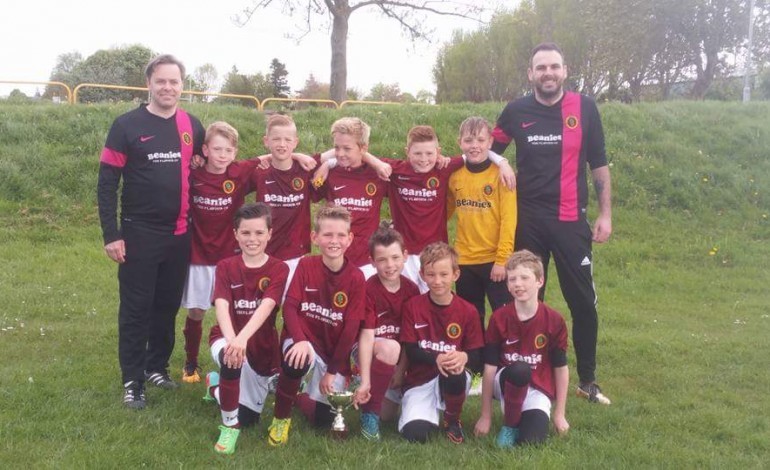 Post season tournaments and the conclusion of the Russell Foster League have kept Aycliffe Juniors busy beyond the end of the usual football season.

The Under 8’s have played two tournaments over the last two weeks. The first at Darlington RA saw two teams being entered and they both qualified from the group stage to face each other in the semi-final. A closely fought contest needed penalties to separate the teams with the Galactico’s side winning the shoot out. They went on to become losing finalists after a tough match against Richmond Town. One Under 8 team also played in the Tees Valley tournament at Middlesbrough FC’s Academy. Penalties again proved their down fall as they missed out against Boro Rangers at the semi-final stage after successfully getting past the group with three wins in four games.

The Under 9’s competed at Ferryhill in another tournament, they finished third in the group with Jake Blythe being named their player of the tournament. The Under 10 TJFA League team were also in action at the Darlington RA event, they were not on their best form but reached the semi-final to face group winners Durham Wolves. An improved performance saw them win this 2-1 with goals from Lucas and Zack. In the final they created the better chances but the score remained 0-0 after extra time against Middleton Rangers. Penalties were called for and this proved to be the undoing of the team as they lost the shoot out.

The conclusion of the Russell Foster League gave Aycliffe Juniors Under 10’s an opportunity to win the Division 5 Spring Cup competition. They sat in fourth place and had three games over a ten day period against the teams above them. First up were HFC United Hoops who were beaten 3-1. Then in to the final week of the season the top three teams were set to play each other and whoever could come up with two wins would take the title. On Thursday night Aycliffe faced Sacriston Fulforth a tight first half ended 0-0 then goals from Bo and Evan secured a 2-0 win. So, going in to the last game a win was needed for the title and Aycliffe were up against second placed Washington Lions. This time it was a great first half and goals from Noah, Evan and Matty (2) opened up a 4-1 lead. The second half was more of a cagy affair but a Bo goal ensured a 5-3 win and the title.

It was a great effort from the team to give the Juniors a superb third league title of the season following on from the Under 10 TJFA Division 1 and Under 18 TJFA Division 3 wins.