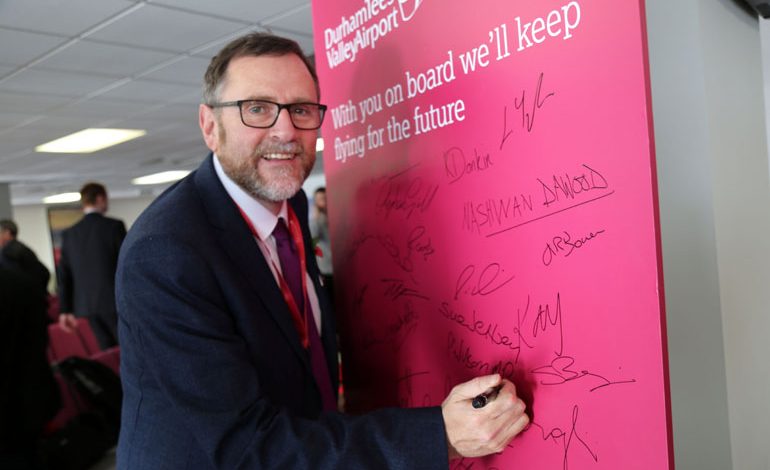 And the MP whose constituency the airport lies in, Sedgefield MP Phil Wilson, who represents Newton Aycliffe, told a parliamentary meeting: “I am sick of the airport being used as a political football. It is now time for grown-up politics.”

In a Westminster Hall debate on the future of the airport, Mr Wilson called the masterplan unveiled by owner Peel to safeguard the airport’s future “robust”.

But while the Minister for Transport, Legislation and Maritime, John Hayes, said the Government was determined to ensure that regional airports thrive “and Durham Tees Valley has to be very high on that list”, he said it was a “local commercial matter.”

He also felt it was “not a matter for the Government, but very much a local matter, and it has to be settled locally.”

Backing Peel’s approach, Mr Wilson said: “I do not agree with those who say the answer to all of the airport’s problems is to take it into public ownership.

“But apparently, this is the view of the newly-elected Conservative Mayor for Tees Valley.

“First of all, it’s not for sale. Secondly, Peel has invested and covered the airport’s losses of £38m since 2003. It is currently losing over £2m a year.

“If you have a private sector company who is willing to carry this financial burden whilst remaining committed to securing a sustainable future for the airport, why would you want to transfer that burden to the taxpayers of Tees Valley?

“And I have no idea how much it would cost to buy in the first place, but I would imagine Peel would want some compensation for the £38m they have already invested into the site. I have worked with Peel for the last 10 years as the local MP and these have not been easy times for the airport or regional aviation in general.”

He told the debate: “I want to see the airport work with the public sector, but I think we should support the owner in their plan and not seek to undermine it.

“So I would say to the Mayor for Tees Valley, draw a line under any idea of trying to nationalise the airport, as I have said in my speech, public ownership is not a panacea. Instead work with the Peel Group, become an Ambassador for the Airport, and help us to secure its future.

“One thing I have learnt in this job, if you really want to do something big for the local area, don’t grandstand, don’t promise what you can’t deliver and don’t take the people of Tees Valley for granted.

“I will work with anyone, including the Mayor of Tees Valley, to secure the future of Tees Valley Airport, but the idea of public ownership is fanciful and I think the Mayor knows it.”

He said: “I am pleased that the Government agrees with me that this is a local matter, using locally devolved funds, directed by a local mayor.

“I have a democratic mandate to deliver on my pledge to bring our airport back into public ownership. That is what I’m committed to doing.

“I find it unbelievable that our area’s Labour MPs have called this debate without even speaking to me.

“Not a single one has met with me to raise the issue of the airport since my election in May. This is grandstanding at its very worst, as it is this type of cheap political stunt that makes a deal harder to reach.

“Labour know this and are doing all they can to defy the will of local people.

“It’s clear now that Labour MPs would rather sit back, stick to the status quo and watch our airport decline.

“I am the only one with the vision to see our airport thrive once again.”