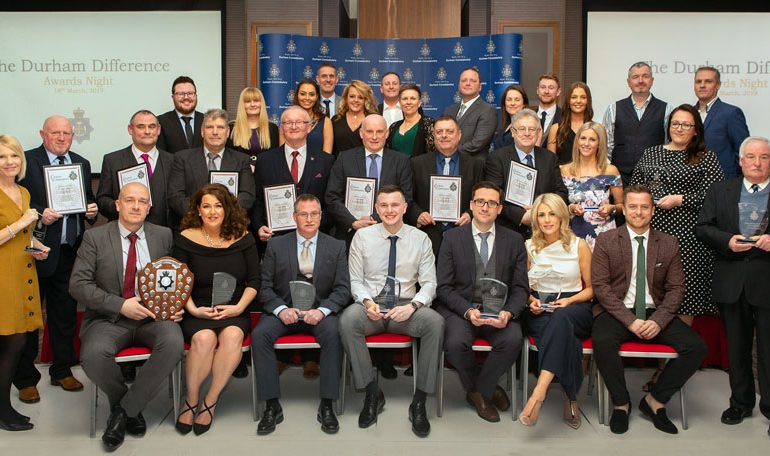 Police officers, staff and volunteers who have gone the extra mile have been honoured at a new awards ceremony.

The inaugural Durham Difference Awards were held at the Radisson Blu hotel, in Durham, this week and recognised dedicated police work across County Durham and Darlington in a host of categories, including Police Officer of the Year, Outstanding Contribution and Team of the Year.

More than 50 nominations were received for the awards, which were presented by Superintendent Chris Curtis and Andy Jackson, chair of the Durham Police Federation.

It was also attended by the Lord Lieutenant of County Durham Sue Snowdon and Chief Constable Mike Barton.

Opening the awards, Supt Curtis said: “This is a chance for us to recognise our extraordinary officers, staff and volunteers who regularly go the extra mile to serve and protect our communities.

“Acts of dedication, courage and bravery happen every day in the police service and the recipients of these awards will be the first to say they are just doing their job.

“But it is important that we bring these achievements to the forefront to recognise them and say thank you for the fantastic work they do.”

Having joined Durham Constabulary in 2016, PC Pitts has quickly established himself as a hardworking, reliable and trustworthy officer.

Last year, he attended the fifth highest number of incidents in the force and had arrested more criminals than anyone else on his team, with more than 50 arrests, many of whom had been identified as the area’s most wanted criminals.

PCSO Michelle Burr won the award for Outstanding Police Community Support Officer of the Year. Since joining the Peterlee Neighbourhood Team in 2017, PCSO Burr has worked tirelessly to help make the town a safer place to live and work.

As part of her role, she launched the Peterlee Young Heroes Awards, which celebrated the everyday heroes in the community, and helped to tackle antisocial behaviour by establishing the Peterlee Community Garden.

Another worthy winner was Sergeant Gavin North, who took home the award for Outstanding Contribution for his work in training officers in mental health, which he does alongside his day-to-day role as a response sergeant.

Sgt North has developed an aide memoire for all officers, which has been used by a number of other forces across the country, and delivers training packages to officers and supervisors in relation to mental health.

Stanley Neighbourhood Team’s work to improve their local community saw them win the award for Outstanding Team of the Year.

Paul Walters won the award for Special Constable of the Year. SC Walters joined Durham Special Constabulary around two years ago and volunteers on Darlington D Relief response team alongside his day job.

Seventeen members of staff who had a combined service of 680 years between them were also presented with long service commendations for 40 years’ service or more.