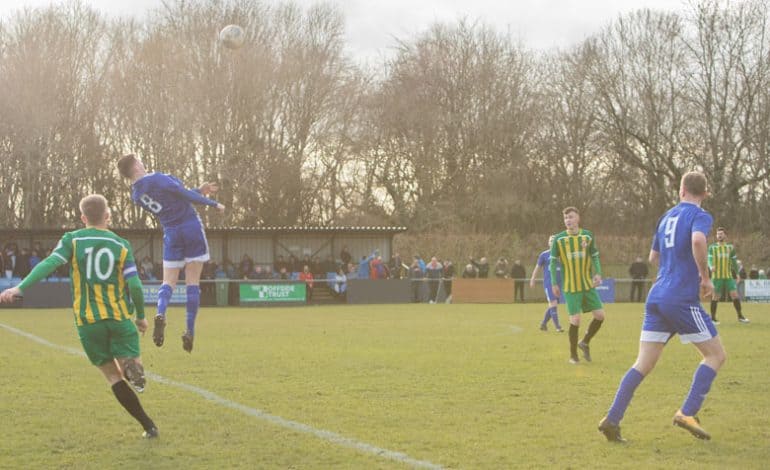 Newton Aycliffe can consider themselves unlucky to lose 1-0 to North Shields at the Beaumont Landscapes stadium.

They were the better team but went down to a goal in injury time at the end of the match.

In-form striker Adam Burnicle was ruled out with injury, and centre half Liam McNamara was playing his last game before moving to Australia.

Then Matty Pennal shot over the bar. Liam Jarvie got through and was denied by another good save from Purvis.

Aycliffe keeper Adam Pickford was called into his first real action on 35 minutes, but was equal to the shot. Right on half time, Lewis Walton fired a shot just wide of the post.

Kev Carr replaced Pennal at half time. Aycliffe put together a good team move ten minutes in, but when the ball reached Jarvie, his effort didn’t trouble Purvis.

Aycliffe had a strong penalty shout turned down on 65 minutes. They kept pressing and Shields cleared the ball off the line on two occasions.

North Shields looked dangerous on the counter-attack, Pickford having to make a good save from Carr.

Campbell then broke through the Aycliffe line and lobbed Pickford, only to see his effort go wide.

Shields broke the deadlock two minutes into injury-time. The ball was played into the box and Patton found the corner of the net.

It was harsh on Aycliffe, but it was North Shields who took all three points.

Aycliffe’s next match is at home to Seaham Red Star on Saturday (Feb 15, 3pm).