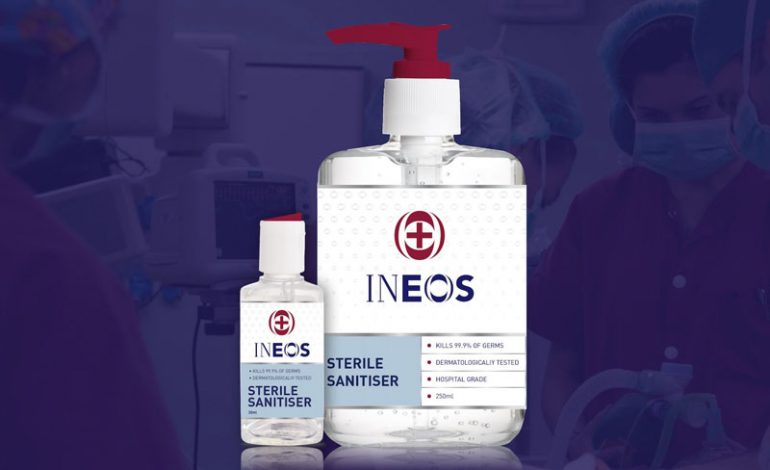 INEOS, which already operates sites at Seal Sands and Newton Aycliffe, initially revealed it would build the new plant within ten days – meaning it could be ready by the end of this week (April 3).

INEOS says the plant – along with similar facilities being built in Germany and France – will supply vital hand sanitisers to hospitals, schools, places of work, supermarkets and pharmacies.

The firm is the largest European producer of the two raw materials needed to make hospital-grade hand sanitizer – isopropyl alcohol and ethanol – currently produced at its sites in Grangemouth in Scotland, Germany and France.

INEOS say the new product will be manufactured according to the specifications of the World Health Organization and will be specially designed to kill bacteria and viruses.

The firm plans to produce both standard and pocket-size hand sanitisers. Supplies to hospitals will be free during the crisis period and the public will be able to purchase bottles from retailers.

Commenting on a “critical shortage of hand sanitisers” across Europe, the firm said it would be providing the products to hospitals entirely free.

Jim Ratcliffe, founder and chairman of INEOS said: “It is becoming increasingly clear that hand to mouth infection is a significant cause of Corona virus contagion and INEOS is Europe’s largest manufacturer of the core ingredient of hand sanitiser.”

He added: “INEOS is a company with enormous resources and production skills. If we can find other ways to help fight the coronavirus, we are absolutely determined to do our part.”

Welcoming the announcement, Tees Valley mayor Ben Houchen said: “Teesside has a huge amount of expertise in the chemicals sector, and with INEOS already having a facility at Seal Sands, building a major new hand sanitiser plant here is the obvious choice – especially given the speed in which it needs to be up and running.

“The national emergency caused by the coronavirus outbreak has seen a mobilisation of industry across the country not seen since the second world war, but businesses large and small across Teesside, Darlington and Hartlepool have responded.”

He said: “The announcement of plans to build a factory to make hand sanitizer free for those who need it most in our National Health Service, as well as the general public, is a significant demonstration of a major businesses responding to this global health crisis.

“The actions of Sir Jim Ratcliffe and his colleagues to construct the facility in 10 days is true leadership, and communities and the nation should recognise their action in the national interest.”

In December INEOS announced that it would close its acrylonite plant at Seal Sands, despite investing £200m into the facility, blaming “decades of under-investment by its previous owners”.

The decision, which put 145 local jobs at risk, attracted heavy criticism from Ben Houchen and other local politicians. It is not yet clear if any of the Seal Sands workers may be transferred to the new facility at Newton Aycliffe.