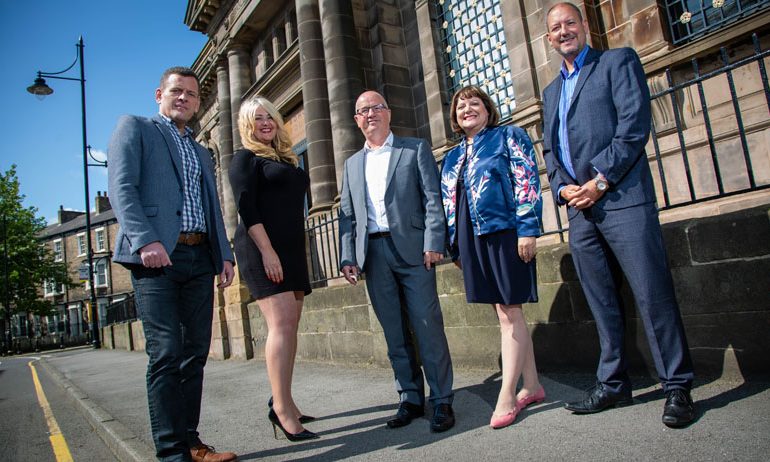 A thriving publishing company is proving there’s life in the old printing dog yet.

Based on the same Aycliffe Today Business model, Walker and his business partner Dave Allan launched Tees Business in March 2015.

After starting out with 36 pages, the publication has quadrupled in size and has established itself as the voice of business for the Tees Valley region.

“Thank you for having the vision, tenacity and commitment to making this night such a success,” said Turner, the university’s gender champion. “Two unassuming men making an impact. It’s so refreshing.”

The organisers are already gearing up for the 2019 event on October 24, with all sponsorship packages snapped up, and expect 350 people to be there on the night.

To complement the women awards, Resolution have launched the inaugural Tees Tech Awards, in partnership with Digital City (part of Teesside University), to celebrate some of the many stand-out companies and individuals from the Tees Valley’s thriving digital and tech sector.

The awards ceremony will also take place in Wynyard’s Grand Marquee next April, while nearly all sponsorship packages have been taken up.

Resolution are also planning other new business publications, including the brand new Wear Business – covering the business communities of Sunderland, Seaham, Peterlee, Washington, Houghton-le-Spring, Chester-le-Street and Durham – to be launched later this year.

In January this year, sales manager Carole Sanderson followed and, more recently, the firm have taken on Julie Burniston as Tees Life editor and events manager.

And later this year, Resolution will be launching the very first This Is Tees Valley – a new national publication, in collaboration with the Tees Valley Combined Authority, which will promote the region to the rest of the UK and beyond.

“Who’d have thought it was seven years ago when I was being told by so many so-called experts ‘publishing is dead’?” says Walker (pictured above, left, with his Resolution team Julie Burniston, Bob Cuffe, Carole Sanderson and Dave Allan), who also runs Aycliffe-based Mantis Media.

“Newspapers continue to dwindle because they have failed to keep up with the visionary social media gurus that left them behind nearly a decade ago.

“Despite their decline, I’d always passionately believed in print, because I think many people still like sit down over a cuppa and thumb through a publication to read stuff they haven’t already seen before.

“It took a few years for Aycliffe Today Business to establish itself properly, before the doubters finally, eventually mumbled defeat under their breath.

“But across two quarterly magazines, Resolution is now publishing 4.7 million pages of positive Teesside news and features a year, with more to come!

“I can proudly say all of this eventually emanated from one idea more than seven years ago – in ‘little old Aycliffe’ – and I’m just as proud to say I’m as passionate as ever about promoting Aycliffe Business Park through these pages, and the town of Newton Aycliffe (and all of its groups, clubs and sports teams) through aycliffetoday.co.uk and our social media channels.

“This has all been achieved with the unflinching, reliable support of top designer Sarah Carlton – my Guardian Angel who designed the very first magazine in November in 2012, and has completed 70+ since.”

Traditional publishing clearly hasn’t had its day. And as Resolution continues to grow – and with the birth of Wear Business – Walker says to watch out for some interesting plans for Aycliffe Today in the very near future.