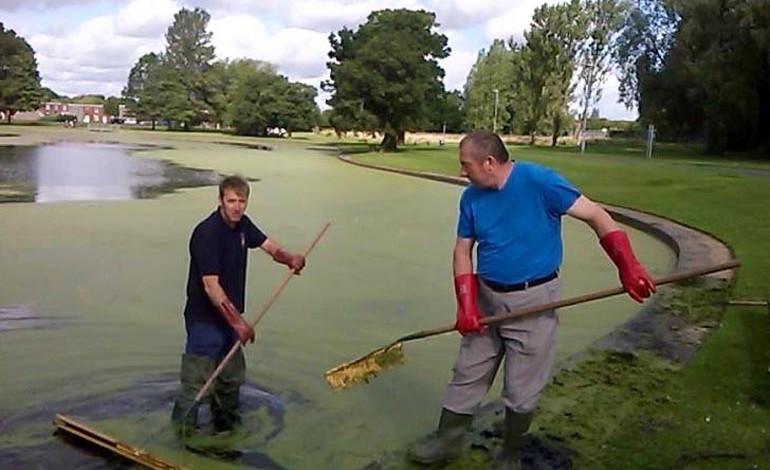 A community champion is upset that his efforts to clean up the Boating Lake in Newton Aycliffe have been described as “hopeless” by a local councillor.

The recurring problem of duckweed continues to blight the West Park lake in the town, known as the Boating Lake.

But Ken Robson, a volunteer who chairs both the ACORN Residents’ Association and Friends of West Park, has been getting his hands dirty by helping to dredge the lake himself.

Mr Robson has been working with Aycliffe Town Council and councillor Arun Chandran to clean up the lake and surrounding areas in recent months.

And despite claims by local Labour councillor Eddy Adam that their efforts are hopeless, Mr Robson insists the improving appearance of the park is evident.

In an open letter at the weekend, talking about efforts to clear the lake of duckweed, Cllr Adam wrote: “They scraped the surface with large rakes and specially designed push bars and worked tirelessly for two-and-a-half hours, but only made a small dent in this green carpet of weed.

“It would seem that this is a very time consuming and hopeless task, this is ‘duckweed’ and it will return as quickly as it is removed.

“This plant has the ability to reproduce rapidly, it can double in just 16 hours to two days, depending on temperature and its growing environment.”

Mr Robson insists he is not disheartened by the hopelessness of clearing duckweed from the lake.

“Aesthetically the removal of the duckweed from the surface of the lakes makes the whole vista of the lakes more pleasing to the eye,” he said.

“However as an iceberg the underlying problem lies beneath in the accumulated filth of rotting leaves and debris which has been building up for years.

“Readers will recall that volunteers from Friends of West Park, residents of Newton Aycliffe from children to pensioners and council staff got involved last year to clean the top lake of all manner of rubbish until forced to refrain by the Town Council.

“Councillor Arun Chandran, working with the support of council leader Bob Fleming and other councillors, has been active in promoting the West Park and its amenities.

“In recent weeks residents will have noticed that benches have been installed around the park and extra bins provided.

“As the park develops rose beds are being installed, bulbs planted, trees planted and plans are afoot to install new play equipment.

“Elderly people and the infirm can now access areas of this most beautiful park thanks to a listening council.”

Mr Robson is hoping a new ecology report due soon will recommend the repair of valves which will improve the flow of water into the lakes.

“This will regulate a flow of cool water through the lakes reducing the ambient temperature and with it the unsightly duckweed which covers the water surface,” he added.

“Of course the Friends of West Park would like to see a total cleansing of the lakes to remove years of residue build up and beautiful clear water returned to the lakes.”

Aycliffe Council declined to comment specifically on the views of both Cllr Adam and Mr Robson, but did say a full environmental and ecology report to determine any potential long-term solutions for West Park lake is due within the next couple of months.