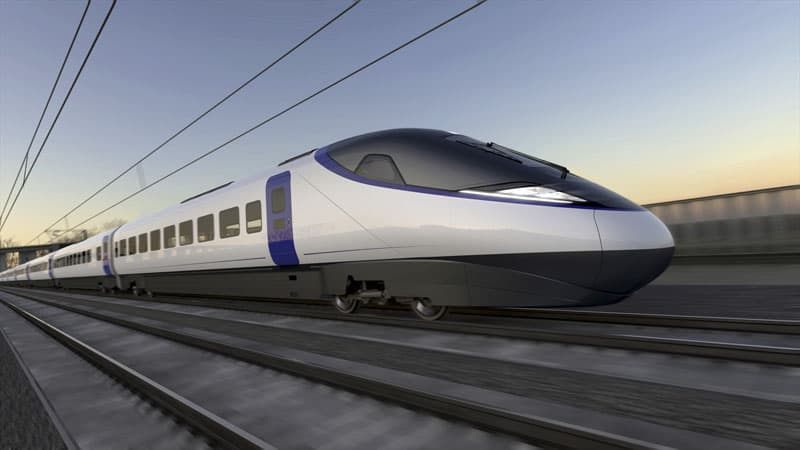 HS2 confirmed today (Thursday) that a Hitachi/Alstom joint venture has been awarded the contracts to build Britain’s next generation of high speed trains at their factories in Newton Aycliffe and Derby respectively.

The landmark contracts – worth around £2 billion – will see the JV design, build and maintain a fleet of 54 state-of-the-art high speed trains (illustrated with the above CGI) that will operate on HS2 – the new high-speed railway being built between London, the West Midlands and Crewe.

The first stages including vehicle body assembly and initial fit-out will be done at Hitachi Rail’s facility on Aycliffe Business Park.

The second stage of fit-out and testing will be done at Alstom’s Litchurch Lane factory in Derby.

Hitachi Rail CEO Andrew Barr said: “We are excited to be pioneering the next generation of high-speed rail in the UK as part of our joint venture with Alstom.

“This British-built bullet train will be the fastest in Europe, and I am proud of the role that Hitachi will play in helping to improve mobility in the UK through this project.”

“I am delighted that Alstom’s joint venture with Hitachi Rail has been selected to develop, build and maintain in Britain the next generation of high speed trains.”

Capable of speeds of up to 225mph (360km/h), the fully electric trains will also run on the existing network to places such as Glasgow, Liverpool, Manchester and the North-West.

Building on the latest technology from the Japanese Shinkansen ‘bullet train’ and European high-speed network, they will be some of the fastest, quietest and most energy efficient high-speed trains operating anywhere in the world.

Transport Secretary Grant Shapps said: “Today’s announcement places Britain firmly at the forefront of the high-speed rail revolution with these state-of-the-art trains serving communities right across the country from London to Glasgow.

“This is another landmark step in the delivery of HS2 which will open up new employment and leisure opportunities for millions of people, levelling up opportunity for generations to come.”

Predominantly UK-designed, the trains will be built, tested and maintained in Britain and will be the most advanced in Europe, supported by decades of experience in very high speed trains around the world.

On the new HS2 network, passengers will be able to benefit from very high reliability levels and the latest passenger innovations.

Train designers will work with world renowned inclusive design experts to put empathy at the heart of the design, meeting the needs of passengers of all ages and abilities.