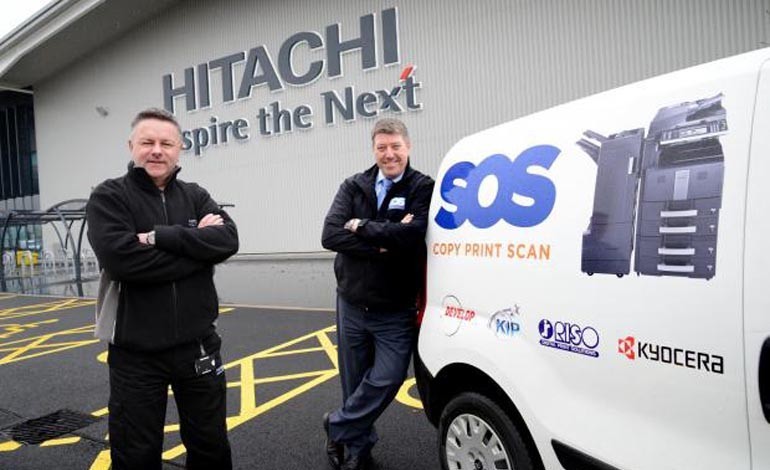 Hitachi Rail Europe has appointed a Gateshead firm as its official printers for its new £82m facility in Newton Aycliffe.

Team Valley-based SOS Group has extended its national relationship with Hitachi by winning a local deal at the Aycliffe Business Park site.

Winning a contract to service Hitachi Rail Europe’s headquarters in Holborn, the print management company became a Hitachi-approved Supplier in 2012.

Now, SOS is working at the company’s new flagship manufacturing base at Aycliffe.

Hitachi’s £82m train assembling facility, opened by Prime Minister David Cameron last September, is where the new InterCity Express trains for the East Coast Main Line and Great Western Main Line, and the AT200 commuter trains for Scotland, will now be made.

SOS Group Ltd launched in 2002 to supply digital office equipment, related software and support. Based on the Team Valley, the company also has an office in Bristol and services ‘blue chip’ clients nationally and internationally.

SOS director George Young said: “Having worked very closely with Hitachi Rail at their operations all across the country, for us, it’s a huge positive to now be working with them so close to home too.

“We first won the contract to provide their print management services when Hitachi Rail opened their global HQ in London and our relationship has developed from there.

“It’s fantastic to see the investment Hitachi is making in the UK, and especially in the North East.

“We’re far from alone in benefiting from the company’s decision to bring rail manufacture back to its birthplace in this region and very proud to have begun working with Hitachi Rail before that step was even taken.”

Hitachi IT manager Malcolm Brown added: “It’s great that a local print management supplier based in North East has been appointed for our flagship facility in Newton Aycliffe.

“The SOS team always respond quickly and have been flexible and helpful in what has been an ever-changing, growing environment, establishing, and then moving, print facilities from three temporary locations to the facility where we now reside.

“Sales support is not just ‘sales’ but finding something that best suits a customer’s needs, short term and longer term.

“The SOS group has worked closely with us on this journey and I am confident our relationship will go from strength to strength over the coming years.”